Collectors are most likely familiar with Play Arts KAI, Square Enix‘s figurine branch that gives a different visual twist to iconic characters, whether with reverence or irreverence. The store has outed many figurines ranging from game characters to superheroes, particularly those from DC like Batman and Green Lantern. Some have been met with positive sales numbers. Others not so much. Given the hype that’s building up around the next Star Wars film, it’s not surprising to see that the next to get the Square Enix makeover are iconic villains rom the franchise.

Don’t worry, there are neither spoilers not most hated characters here. Or at least not yet. All we have are three of the classic villains, an unnamed Storm Trooper, the tragic Boba Fett, and of course, the hero turned villain turned hero that needs no introduction, Darth Vader. Purist might balk at the Play Arts variants, but there is very little variation in the overall appearance, at least compared to the more heavily modified versions of Batman.

The characters do get to wear more armor than their classic appearances. For the Storm Trooper and Boba Fett, that might not be much of a big deal. On Darth Vader, however, it makes him look a little like a steampunk version of a samurai. The weapons carry the same pattern. Flamethrower on Boba Fett? Almost normal. A “flaming” lightsaber and flame manifestation of the Force? Maybe not so much. Then again, it’s probably easier to craft these than having a glowing stick or bolts of lightning. 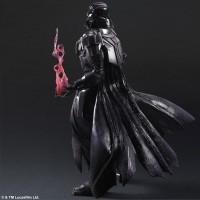 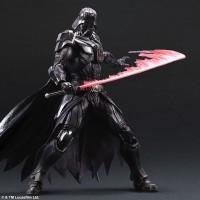 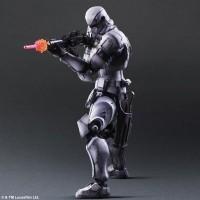 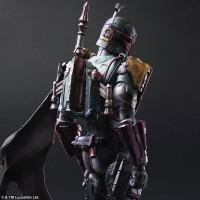 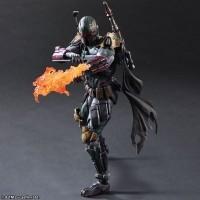 The Star Wars Play Arts variant will sell for 12,960 yen each, or roughly $109. Darth Vader will come out in May while the Storm Trooper and Boba Fett won’t arrive until July. It might be interesting perhaps to see Jar Jar Binks as a Play Arts Variant.Or maybe not.