Plastic Logic‘s new QUE ereader raised some eyebrows at CES 2010 when the company announced their pricing: $649 for the WiFi-only 4GB model, rising to $799 for the WiFi/3G 8GB version is a whole lot of money when consumers are used to $259 Kindles and nooks.  Still, when SlashGear caught up with the QUE earlier we found it a hard device not to like; check out our first-impressions and a hands-on video demo after the cut.

Frankly Plastic Logic have scored two thumbs-up for both hardware and software with the QUE.  At 10.7-inches the monochrome display is considerably bigger than most mainstream ebook readers on the market, and thanks to the E Ink Vizplex technology it’s just as crisp and easily readable as you’d hope.  It’s also sandwiched into a surprisingly thin chassis, literally magazine-like, and that goes a long way to making the in-hand reading experience feel more natural.  To go with their name, Plastic Logic have attempted to use as much plastic in the construction as possible, and happily they’ve not skimped on quality.  Overall it has the sleekness you want from a new gadget, but it’s also as plain as you need your ereader to be so as to avoid distracting from the text. 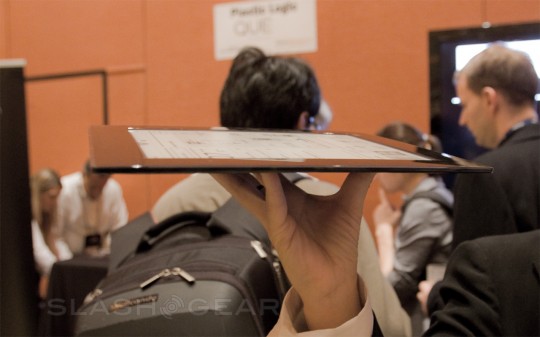 Control is predominantly via the touchscreen – the only hardware controls are a power button on the bottom, next to a USB port, speaker and SD card slot, and the Home key at the top right-hand corner of the display – and so we’re happy to report it’s a reasonably responsive one.  Screen refreshes seem a little faster than the Kindle, certainly better than the nook can be at times, and the on-screen interface is a sensibly laid-out balance between eye-candy and usability.  The down-side to the relatively large display, though, is that text entry in landscape mode can be pretty cumbersome with the on-screen keyboard.

However that expansive screen does mean that e-newspapers and e-magazines can more accurately match the layout of their print counterparts, and Plastic Logic preloaded some examples of USA Today to show just what the new Adobe-developed truVue format can do.  It’s actually one of the best digital text content experiences we’ve had to date; the formatting isn’t always perfect, but it’s far better than poorly-zooming PDFs or ebooks that only offer a few different font sizes.  Meanwhile the home-view – with various panes showing different periodicals, frequently accessed documents and the like – looks like it will work well with the eventual Microsoft Exchange email and calendar support Plastic Logic say they’ll be adding.

We’ll have to put the QUE through its paces more thoroughly when it starts shipping in mid-April 2010 before we can come to any final conclusions, but so far those prices are our only real concern.  CES 2010 is almost saturated with ebook readers, and among that crowd Plastic Logic have managed to stand out; that’s an achievement in itself.