The exoskeleton the little boy in the image here is wearing was created by engineers from the Spanish National Research Council and rather than being designed for adults, this one is designed to help children. Specifically the 26-pound aluminum and titanium exoskeleton aims to help children with spinal muscular atrophy known as SMA. The simple act of walking could help stave off potentially deadly side effects of the disease.

SMA is a rare disorder that results in the loss of motor neurons and progressive wasting away of muscles that can leave those affected unable to walk. The problem for children that have this condition is that they end up lying down most of the time and a host of medical complications can arise. The one perhaps most feared from being prone for extended periods is lung ailments like pneumonia and others that could result in death. 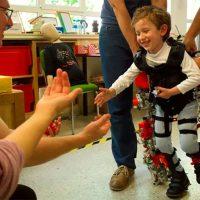 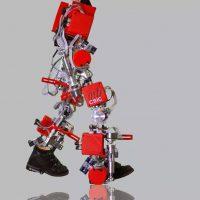 The tiny little exoskeleton is designed to help the child walk upright to keep their muscles active and fit allowing them to prevent lung dysfunction, pressure sores, and loss of bone density. The exoskeleton has an integrated processor inside that can detect the child’s leg movements. When those movements are detected, the exoskeleton then moves its mechanical legs accordingly.

The exoskeleton has five different motors in each leg to give it a natural a gait as possible. The work is powered by a rechargeable battery good for five hours of use per charge. We don’t know how many miles that equates to and it appears that helpers are required to support the exoskeleton. The exoskeleton is in clinical trials right now. With all the work going into these exoskeletons, one day those unable to walk on their own might be able to get up and around on a whim. A similar exoskeleton for adults called the Phoenix was unveiled back in February.