The Raspberry Pi is a great low-power, low-cost computer for making things and learning STEAM, but its barebones design isn’t always a good fit for some classrooms. Fortunately, there is a whole universe of RPi products and accessories to fill in the gap. The pi-top is one of those, guiding young and old alike in building their own laptop almost from scratch. And on its third birthday, pi-top is introducing a second-generation pi-top that not only makes it more powerful but also more accessible in more ways than one.

We did a review of the original pi-top not so long ago and, while the idea and execution were commendable, it definitely needed some more polish. The 13.3-inch 720p screen was already old, the placement of the touchpad was odd and uncomfortable, and its ingenious rail system was rendered nearly useless because of the difficulty of accessing it.

That polish has finally arrived. The new pi-top now features a 14-inch 1920×1080 screen that can fold down flat 180 degrees. It’s still not a touch screen though. It now has a full-sized touchpad that rightly sits below the keyboard. pi-top was able to accomplish this by a rather interesting change. Instead of a slide out panel at the top to reveal the rails and the Raspberry Pi, it is the keyboard itself that slides out to reveal the laptop’s innards. 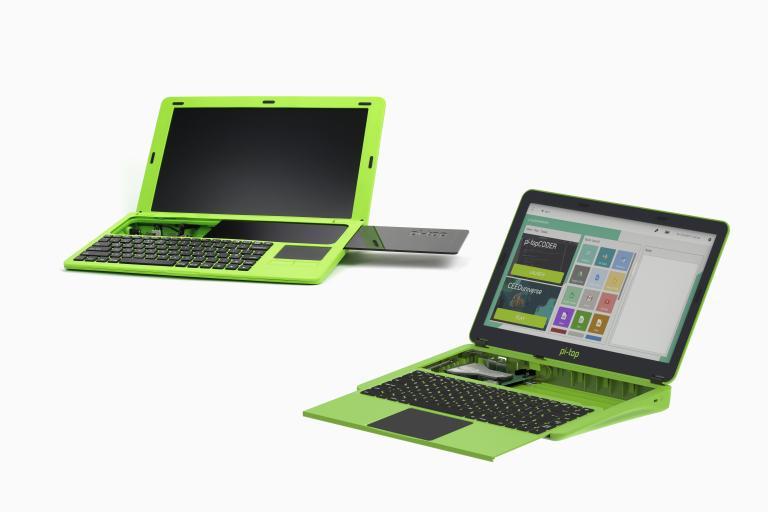 The theme of the new pi-top seems to be one of accessibility. Because of the new sliding keyboard, it’s easier to get to the rail system. The new pi-top also rearranges the RPi and hub boards so that there’s more space of add-ons and modules on the magnetic rails. What’s more, the Raspberry Pi’s ports can now easily be reached from the back, one of the biggest flaws of the first gen’s design.

All these changes, unfortunately, means that, other than the RPi itself and the add-on modules, none of the first pi-top’s parts can be reused for this new model. pi-top does throw in a new “inventor’s kit”, which contains a booklet with 20 hands-on projects, and cut-out parts for games, to make the $319.99 purchase all the more worth it.