Philips is releasing what could soon be the cheapest 60 watt equivalent LED lightbulb on the market. There are a plethora of reasons people might want to stick with incandescents over LED lightbulbs, but Philips’ newest LED bulb just voided the majority of consumers’ biggest concern: cost. At only $4.97 USD, the price of these bulbs is low enough to sway those consumers who have been looking to lower their monthly electric bill but still haven’t been convinced by previous LED bulbs on the market.

LED lightbulbs may save a little on the electric bill, but they have their downsides as well. From a cosmetic standpoint, incandescent light is so much warmer, creating a more friendly and flattering light than most LED’s.

The lightbulbs are available now at Home Depot’s online shop, but is out of stock. The LED bulb will launch in-stores on May 1st. As a new-release promotion, Philips is selling two for the price of one for the next three months.

By the way, it’s Earth Day today. You could believe it’s a day to renew your vows as an environmentalist or you could just think it’s another consumerist holiday. With Philip’s latest LED lightbulbs you can say, “why not both?” and spend money now to save money and the environment in the future. 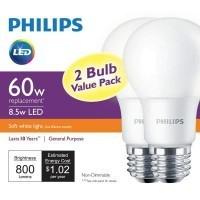