Time and again, Pebble’s crowdfunding attempts have been met with nothing but phenomenal success, including the latest Kickstarter that lumps together the new Pebble 2 as well as the totally never before seen Pebble Core. Soon, the earliest Pebble birds will be receiving the first batch of Pebble 2’s, but before that happens, Pebble will be giving their existing Pebble Time users a treat, rolling out the also totally new Pebble OS 4.0 that will almost literally bring a new face to the smartwatch.

While Pebble OS 4.0 definitely has a lot of under the hood changes, the startup is teasing some of the key new features that both users as well as developers can expect, all of them revolving around the watch face and the app launcher. For example, watch faces should now adjust themselves automatically whenever a Timeline Quick View is visible on the screen so that equally critical information, like the current time and date, won’t be obscured. 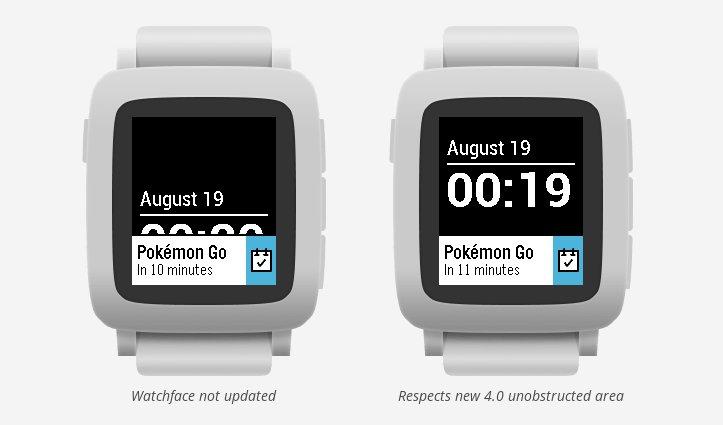 Developers will also be able to take advantage of the new AppGlances feature which lets them add a line of relevant information to the app’s entry in the launcher, like scrolling text for the next, most urgent reminder, ETA for an Uber ride, or simply the current temperature.

Developers will also be able to give their apps more character with custom icons, like the Pikachu above. Despite the Pokemon GO references, it doesn’t mean there will be some nifty, official support for the hip, though some say dying, game, unfortunately.

The biggest new OS 4.0 feature, however, is something that Pebble itself is so hyped about: One Click Actions. These basically lets developers and users associate a single quick action for an app, probably their most frequently used action for the app, like hailing an Uber ride. Users need to simply make one click, hence the name, and it’s done. No need to jump through pages in the app to get home.

The new Pebble 2 smartwatch itself will start shipping in September, but Pebble says that OS 4.0 will roll out to Pebble Time owners before then, which is why it setting a hard August 31 deadline for developers to get their OS 4 compatible apps and watches faces in.