If reporting that the entirety of the PC market weren’t enough of a punch in the gut for Microsoft from the analytical group IDC, the suggestion that their newest operating system is to blame really, really is. What you’re about to witness is the continued downfall of the PC industry in the charts of the IDC, this most recent quarter’s report being much worse for ware than we’re sure any of the manufacturers listed would have liked. When your only job is to create PCs and you hoped Windows 8 was going to bring the industry into a shining light, you’re probably not too happy right about now.

As this most recent IDC Worldwide Quarterly PC Tracker report shows, the first quarter of 2013 was not extremely kind to the likes of HP, Lenovo, Dell, Acer, ASUS, and the rest of the bunch. With a total average drop in PC shipments of 13.9%, it’s not appearing too positive for the near future in next-level PC production. That 13.9% drop is compared to the fourth quarter of 2012, while year-on-year the decline was a rather similar -12.7%.

“At this point, unfortunately, it seems clear that the Windows 8 launch not only failed to provide a positive boost to the PC market, but appears to have slowed the market.” – Bob O’Donnell, IDC Program Vice President, Clients and Displays

You’ll find that Lenovo – good ol’ Lenovo – was the only vendor to have stayed flat from the quarter before this one to the one we’ve just completed. Their market share also went up a couple of percentage points while each of the other top-5 groups decreased by at least .2 points of a percentage – that’s Dell hanging in there as well. HP remains on top of the stack with a 15.7% share of the market but was hit hard with a 23.7% drop over the past year. 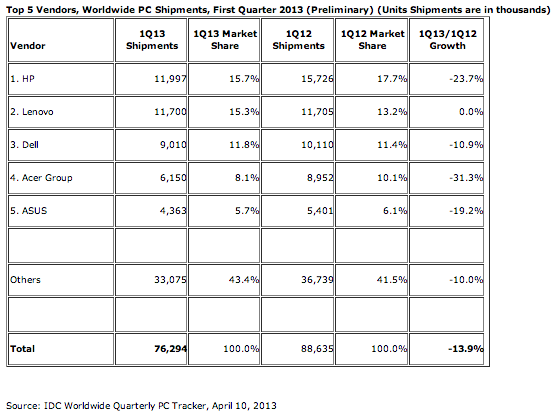 “While some consumers appreciate the new form factors and touch capabilities of Windows 8, the radical changes to the UI, removal of the familiar Start button, and the costs associated with touch have made PCs a less attractive alternative to dedicated tablets and other competitive devices. Microsoft will have to make some very tough decisions moving forward if it wants to help reinvigorate the PC market.” – Bob O’Donnell, IDC Program Vice President, Clients and Displays

According to the top 5 vendors chart of United States PC Shipments, Apple reaches in for a piece of the pie – as does Toshiba. Here we’ve still got HP up on top, Dell not far behind, and Apple butting heads with Toshiba and Lenovo. Here you’ll find Lenovo once again the only brand of the top five to not have lost market share over the past year with a 13% gain from Q1 of 2012 to Q1 of 2013.

Of course when you average the collection of the top 5 vendors of PCs in the United States, you still get a cool 11% drop this quarter compared to 2012’s Q1. Apple on its own also lost 7.5 points year-on-year in this market, still running strong with an estimated 1,418 units shipped in Q1 2013.

Have a peek at the timeline below for other recent IDC reports to see how the mobile and desktop PC universes are making their time here as we roll into the spring of 2013.