PayPal email error has confused users up in arms

A handful of PayPal users in Europe reported that they received an email from the online banking service saying that they won €500 that they could claim by logging into their account. It wasn’t a phishing attempt, but rather just an error on PayPal’s part that sent out a bunch of winning emails to users.

The emails were a part of a raffle drawing that PayPal actually plans to start sometime this summer, but it seems that when testing the platform, PayPal accidentally sent out winning emails to some users. Some of them logged into their accounts to claim the money, but found that €500 wasn’t waiting on them. 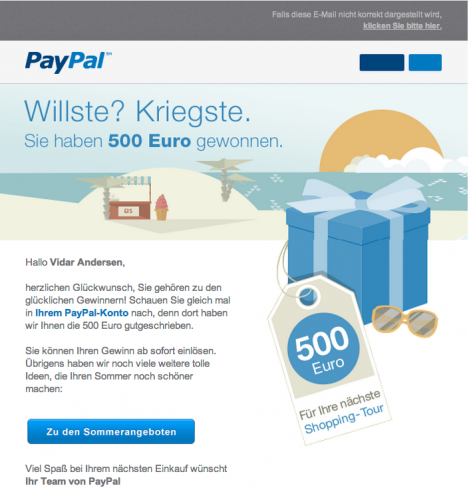 Of course, PayPal hasn’t been all that popular amongst users the past couple of years. Last year, they updated their policy that would prevent users from suing unless they physically mailed in a letter to the company that would exempt them from the policy change — a rather blatant attempt to get users to dislike them.