Parrot Jumping Sumo leaps its way into stardom at CES 2014

Parrot has done it again, this time with their Jumping Sumo remote device. Unlike the civil drone, the Sumo rolls and tumbles, grabs as it leaps. It’s controlled via an app, and has a front facing camera for all kinds of shenanigans. For pure fun, the Jumping Sumo might take the cake at CES 2014.

It’s got two massive wheels on either side, which have a springy shock system of sorts. With something jumping around so much, you’re going to want a soft landing. The Jumping Sumo is made of a resilient plastic that felt more rubber than hard plastic. The team tells us it’s a special compound, which is made to withstand the impact naturally caused by big drops.

The front of the device has a menacing look, which was hard to grab in demonstration. With so much spinning and jumping, the Jumping Sumo was particularly hard to nail down. The front facing camera sits square in the middle, too, and relays back to the app, so you’re almost virtually driving it. A neat option that adds to the experience in a visceral way. 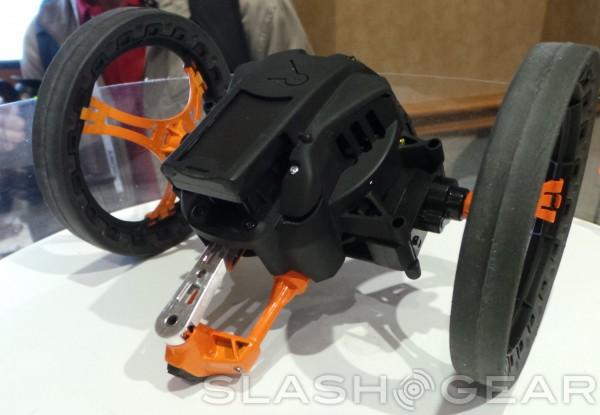 The rear “jumping” arm, which catapults the Sumo into the stratosphere, also has a grabbing mechanism, although that wasn’t on display. It’s mean tot fetch and retrieve, and the jumping capabilities only add depth to the trouble we can get into. And we will get into trouble, should we get our hands on one.