In a bid to take on the top contenders in the smartphone market this season in the USA, Pantech will be bringing a device by the name of Perception, complete with 3D gesture sensing technology onboard. The Samsung GALAXY S 4 will be in the hands of users by the end of the month on several carriers (and Verizon before Summer begins), it being issued with a technology that allows users to “hover” over their display to activate several features. Pantech’s bid for the 3D sensor trend is being delivered this month with what they call “Motion Sense.”

This Motion Sense technology will be appearing on the Verizon-exclusive smartphone Pantech Perception, this device also including several specifications that push it to the top tier smartphone category. The Pantech Perception includes a 4.8-inch touchscreen with HD Super AMOLED technology, its back features an 8 megapixel camera, and its front uses a 2 megapixel camera. Pantech will be delivering this device with a 16GB bit of internal storage as well.

The 3D sensor technology Motion Sense will allow users to wave their hand over the phone without touching it to activate several features. When the Pantech Perception rings for a phone call, the user will be able to wave their hand over the face (without touching it) to answer said call. Users will also be able to scroll through songs in the smartphone’s basic music app, look through photos, or move through contacts with this new technology.

The Pantech Perception will not be delivered with the most recent version of Google’s mobile operating system Android Jelly Bean. Instead the Perception will be delivered with Android 4.0 Ice Cream Sandwich with a guarantee from Verizon that it will be upgraded to Jelly Bean “soon”. So says Verizon Wireless representative Albert Aydin along with a note on how this device will be sold for 99 dollars and 99 cents just so long as users agree to 2-year mobile contract and send in a 50 dollar mail-in rebate. 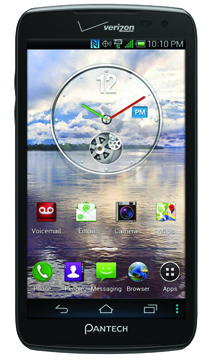 This effort will be appearing in the USA this month, starting no earlier than the 25th day of the month. Have a peek at SlashGear’s Pantech tag portal for more information on what this manufacturer is doing to come in full force to the North American mobile device market with smartphones galore.