Panasonic just made the world’s most powerful blue laser: Here’s why

In a demonstration in Osaka, Japan, Panasonic demonstrated the new world’s highest brightness blue laser. They’ve done this with a couple of technologies/techniques, using wavelength beam combining (WBC) with a direct diode laser (DDL) to produce a single, highly powerful blue beam. With this technique perfected, beam quality remains the same while power increases as the number of laser sources grows. The laser power can be immense!

DDL stands for Direct diode laser, a system with which a highly focused laser beam is irradiated to a selected target. This is different from conventional solid state lasers or CO2 lasers, as the tech is both small and efficient. Direct diode lasers require less electricity to produce the the same amount of power as conventional means, allowing it to be the obvious choice for top-tier laser-based welding, cutting, and other sorts of manufacturing.

Panasonic just demonstrated control over a blue laser – more specifically they’ve shown how far they’ve progressed with the systems with which they’ve been working for the past 7 years. They collaborated with a company called TeraDiode (TDI) in 2013, then acquired TDI in 2017. TDI focused on WBC, and has been developing output-power optimization as well as wavelength shortening. 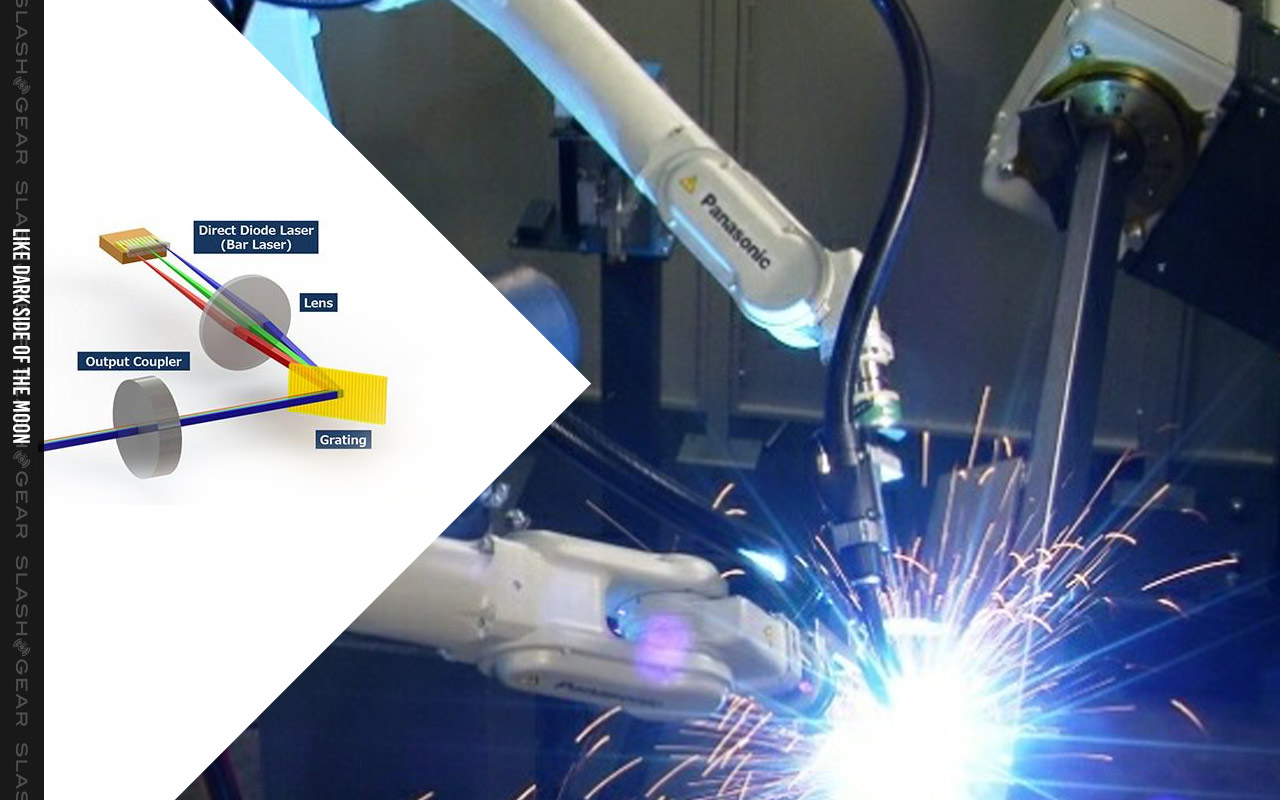 The solution Panasonic has now is referred to as the “high-beam-quality blue laser”. This laser works in the 400 – 450nm wavelength band, where blue lasers in general have a wider band – between 360 and 480. This solution was achieved by combining more than 100 emitters all unto a single beam with WBC tech.

Panasonic suggested that demand for copper microfabrication “has a high demand” for use with “automotive motors and batteries.” As a release from Panasonic says, their demo “opens the door to laser intensities that could be two orders of magnitude higher than conventional blue laser systems.” Now all they need to do is get this tech in a new robot.

ABOVE: Back in 2014, Panasonic released LAPRISS; the world’s first laser welding robot system equipped with an infrared DDL using WBC technology. Similar robotics will work with the blue beams of which we speak today.