Like it or not, we’re still in the thick of a USB-C hate-storm. Most recently, a notable iOS developer slammed the most current iteration of the MacBook Pro in part for eliminating all but a few of the same kind of port. It’s a bold move by Apple and others, but one that hasn’t been widely lauded. But, for a few hundred bucks, you can fix all of your connectivity woes. Sort of.

OWC’s Thunderbolt 3 dock was designed to give you back every single port Apple threw out, and then some. Its handsome, heavy Space Gray or Silver aluminum and glass chassis holds the following ports:

The SD Card slot, audio jack and one USB port are upfront. The rest are hidden away around back. OWC clearly thinks those are the more useful ports for most people, and that’s probably accurate. Of all the complaints around USB-C, those three ports are among the more widely missed (and ridiculed; Apple really sells an SD card dongle).

The OWC Thunderbolt 3 dock allows pass-through charging for MacBooks, but at 65 watts. That’s fine for a 13-inch MacBook Pro (or just a MacBook), but the 15-inch variant charges at 85 watts per hour. Still, this is a dock, so you’re likely plugged in all day, so the argument against the charging capacity is negligible or moot.

Really, OWC is challenging what ‘Pro’ means in 2017 with its Thunderbolt 3 dock. It’s also a bit of addition by subtraction.

This year, I went all-in on Apple’s products and recommendations. My 15-inch MacBook Pro? Specced out. 27-inch 5K monitors? I have two! USB-C? Great, let’s re-up and re-buy all the accessories, like an external drive.

I have no fear of USB-C. I actually enjoy it! I’m also not a pro photographer, or someone who has various drives and accessories for business use. I prefer wireless over wired headphones. My external monitors are even USB-C. I don’t even own an ethernet cable; WiFi is fantastic at the home office.

OWC gives much of that productivity back, even when it comes to travel. In addition to the desktop hub there’s a travel dock with USB 3.1, an SD card reader and HDMI ports. For many, this may actually be enough.

(As an aside, that may not even be possible with the 5K monitors. The MacBook’s dedicated GPU handles a lot of the pixel pushing for them, which is why they both need their own ports on my MacBook. If you purchased the smaller 4K models, this is a swing-and-a-miss from OWC.)

Really, anyone with a multiple monitor setup might be left wanting. Its single DisplayPort is limiting, and there’s not one HDMI port on the desktop hub. Unless you’re able/have figured out how to daisy-chain your monitors before linking to your MacBook, the solo port is limiting for those with multiple external monitors.

At $299, the Thunderbolt 3 dock is not exactly too much – but it’s not affordable. It’s solid, reliable and none of the ports have failed in testing. I can’t argue it’s bad hardware by any stretch.

It’s best for those who are left cursing Apple every time they dig out a dongle for their USB accessory. It’s also a great option for users who prefer a wired internet connection and use SD cards.

But OWC sits at a rare intersection on a Venn diagram of past and future. I’ve made the leap to USB-C already. So much so that I actually with this hub had more of those ports! Others haven’t, and I’d urge you to consider your peripherals before making a choice to buy this. 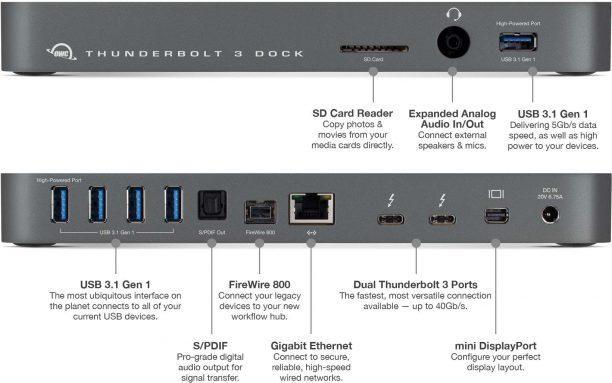 Buy it or leave it?

If you have USB accessories you can’t or won’t upgrade to USB-C, the Thunderbolt 3 is a good choice. If your external monitor has a mini DisplayPort cable – or you’re okay with buying one specifically to use this dock – I say go for it. Should you need HDMI and less ports, the travel dock is always an option.

If I have one small complaint, it’s that the Thunderbolt 3’s audio port is listed statically in the Mac’s audio menu. If you’ve been using a wired headphone and forget to change audio settings to another audio source afterward, you may find yourself befuddled by the lack of sound when you’re expecting sound from external speakers or a monitor.

Really, I wish this were $199 because it’s good kit. I think that price-point would encourage more buyers and ease USB-C woes which will take many of us years to get through. At $299, it’s well-suited for the true pros out there, so OWC has definitely proven its point.