The Android-toting game console known as OUYA has had its first teardown appearance this week, a piece-by-piece de-construction showing that it will be a relatively easy repair job for future users. The console and gaming controller are taken apart bit-by-bit with open-source and free-to-modify aims in mind – the creators of this system appear to have stuck to their word when it comes to simple modifications.

Inside the iFixit teardown the innards promised by the manufacturers of the OUYA, including – but not limited to – the NVIDIA Tegra 3 quad-core processor with 4-PLUS-1 technology (meaning there’s 5 CPU cores, not just 4). Under the hood two Samsung 4Gb DD3 SDRAM modules sit next to one another, these two 4Gb modules together creating 1GB total. 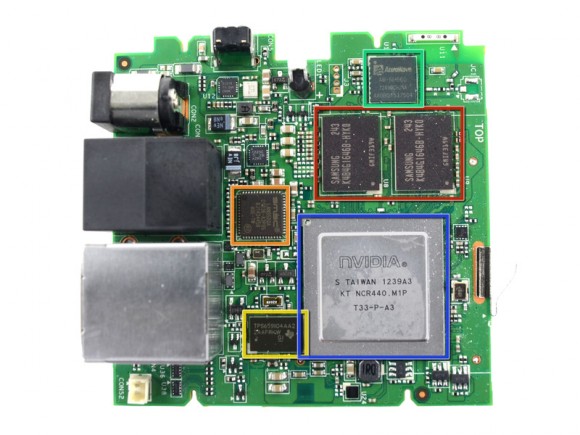 Also inside the OUYA box is a single fan, easily removable and attached with just four standard screws and a wire. As noted by iFixit, this is good – especially since its the only moving part in the whole amalgamation of metal and plastic. The fan is, for those of you looking to stock up, a SUNON MagLev HA40101V4 DC brushless and you’ll be rolling with 12 volts at 0.8 W of power.

Perhaps oddest of all is the addition of weights to this machine. Inside the bottom of the console are five miniature metal plates added to keep the device weighed down and solid on a flat surface. Each of the five plates weighs in at 0.39 ounces, creating nearly 2 ounces of staying weight for the bottom of the box. The gaming pad coming with the OUYA is a similar bit of ease in tear down – only a few screws and you’re in!

Have a peek at SlashGear’s OUYA tag portal to see more information on this machine’s innards as well as its connections to the gaming universe at large. You’ll be able to see this device on the deck of your own TV stand later this year, if all goes as planned, and for right around a hundred bucks, too!