When you happen upon Outlast for PlayStation 4, you’ll find it tagged with some rather heavy-looking warnings. Heed them all. This game is not for the weak-hearted. If you’ve got a PlayStation Network account you’ll be able to download the game for free – otherwise it’ll cost you a cool $19.99 – completely reasonable for one of the most highly rated horror games of 2013, right? Ten minutes of download time (at least) might have you reconsidering.

Therein lies the duality of this game – if you’re in a hurry to get results, you may as well stop trying to play in the horror genre altogether. Here you’ll begin with a several-minute car ride listening to the radio about strange happenings around the area. Box-elder bugs being sprayed for by helicopters – the usual. Your vehicle then stops at a spooky mansion sort of place (you’ll find out what this is all about when you actually play it) where you’ve got a self-inflicted directive to move forward. 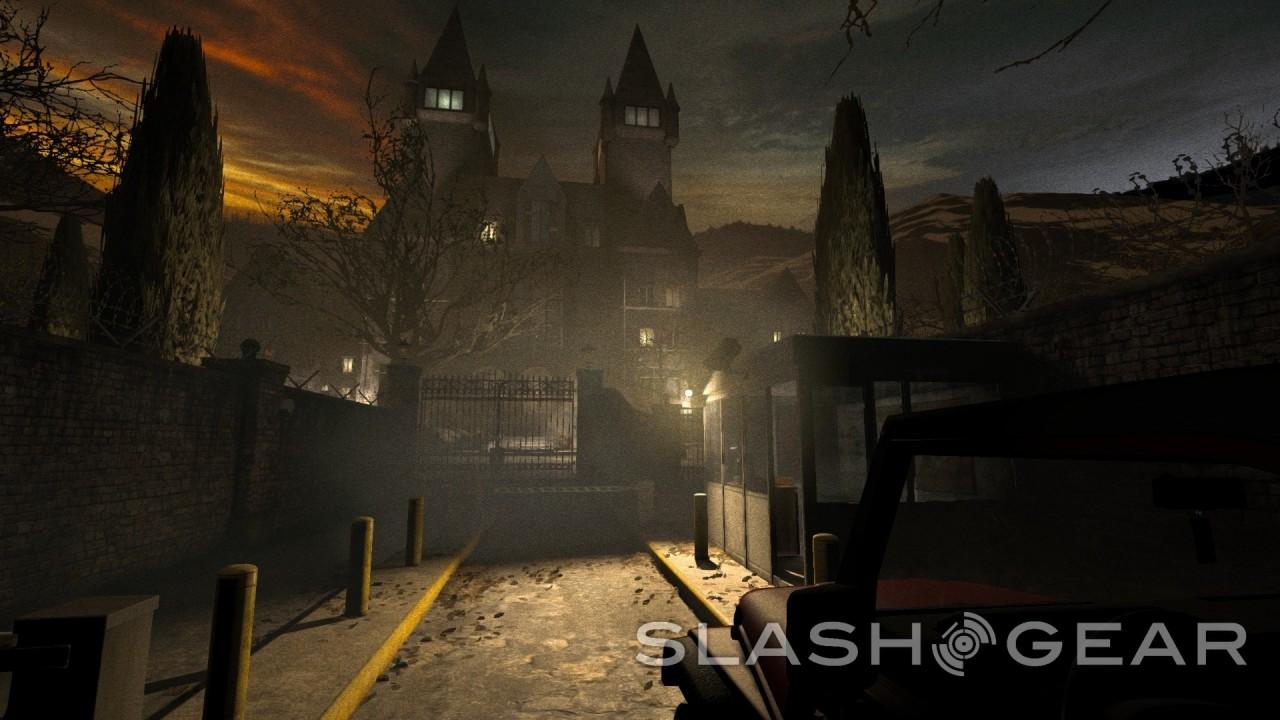 This sort of theme sticks throughout the game, just like any horror movie should. While that vehicle is still sitting outside, you’ve just GOT to move forward.

WARNING: Do not play this game if you’re offended by massacred dead bodies, nudity (alive, dead, undead), murder, the tearing apart of flesh, and a bit of necrophilia thrown in for good measure.

Graphics in this game are decent. Certainly not the best of the bunch here on the PlayStation 4, but very apparently made within the last year. Re-adjustments of pixels as you move throughout the game and an extremely dark environment in general make for a game that doesn’t appear to be making a play for most graphics-intensive of the season, anyway. 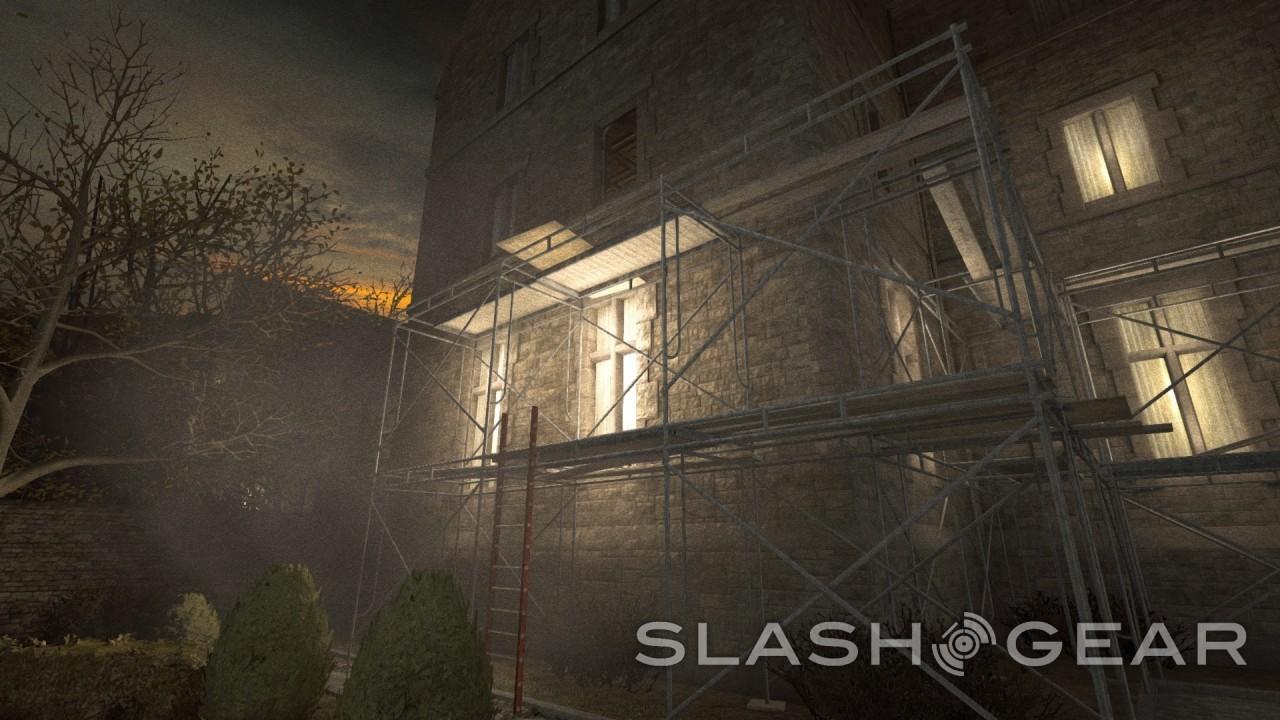 You’ll find yourself cursing the character you control every once in a while. Closing a door, for example, means SLAMMING a door as loud as possible. Walking on any floor means creaking frightfully, and – through no fault of your character, of course – waves of creepifying music wash over you and most key points.

Seeing in the dark means pulling out a video camera (remember those?) and turning on night vision. This should also serve to add an additional level of fright to this already goosebump-intensive title. 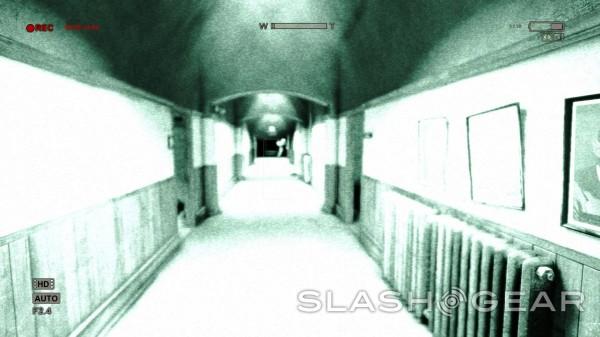 If you’re used to playing first-person shooters like Call of Duty or 3rd-person adventures like Tomb Raider, you’ll also curse the lack of control you have over your environment. You can’t just pull out a double-jump here or a grappling hook there. Moving through a couple of book cases means turning sideways and sliding through – everything is meant to set your senses on end.

Mount Massive, as its called, needs to be explored in both the light and in the dark. Through the course of this game you’ll both be holding your breath due to incoming nightmares and attempting to sneak around freaks of nature as they happily mangle bits to themselves. 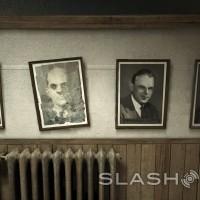 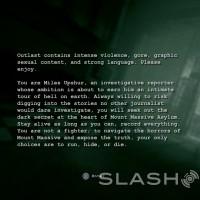 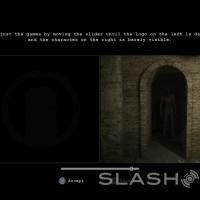 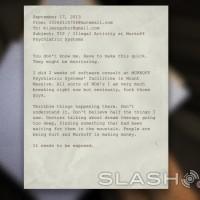 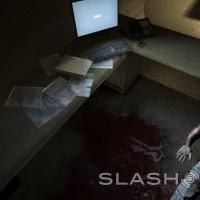 Your goal is to investigate Mount Massive, but to do so whilst staying alive. You’ll need to collect batteries (to keep your camera alive), and stacks of paper (because obviously they’ll be better than the film you’ve captured in showing what’s happened here). Doing so will seem a bit too easy in some places (with enemy AI acting a bit too foolish to be real – not that you’re aiming for realism), and exceedingly difficult in others.

Frustration can set in here and there – back-tracking isn’t something we’re especially keen on doing in any game, but here it’s a requirement more than once. If you’re a puzzle-solver and you’re all about being terrified as you make your way through a maze of ghastly visions, this game is perfect for the terror-lover in you.

Again – Outlast for PS4 is not the most visually spectacular game on the market today – it’s a straight-up port of the PC version of the game from last year – but it does exactly what it sets out to do. If you want what’s easily one of the finest horror games out right this minute, Outlast is the ticket – for whatever platform you’re playing on.