Opera is a name you might more readily associate with mobile browsers, but in late 2013 it tried to diverge a bit from that core business. Focusing on one of its key strengths, which is compressing Internet data before it arrives on your device, it launched the Opera Max service that brings that feature to cover not just web pages, but more kinds of data. In the latest iteration of its Android app, it brings two new features to the fold: watching Wi-Fi data usage and shutting down obstinate apps.

The core purpose of Opera Max is to help you save data bandwidth and, therefore, save money from carrier bills. It does so by compressing data that travels through the Internet to and from your device. This compression mostly covers web pages, text, images, and even videos. The app also helped users become more conscious of their data usage through a more fine grained monitoring interface that also let them block apps that consumed lots of data in the background.

That monitoring and control, however, applied only to mobile data, which isn’t surprising since that’s the most common source of head and wallet ache for consumers. But apparently users wanted to be able to do that with Wi-Fi data as well and Opera was only too happy to oblige. Now users are ensured of faster Wi-Fi speeds through the magic of compression.

In addition, the Opera Max offers even more power in controlling those apps. In addition to blocking data hogs using all your mobile bandwidth, you can now do the same with Wi-Fi culprits. Plus, the app also allows you to block apps that track you, increasing your privacy. 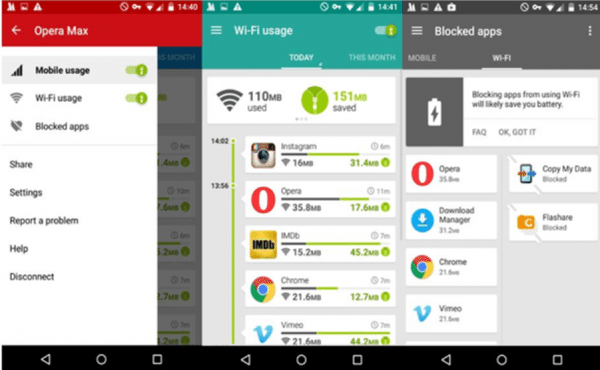 As useful as Opera Max may sound, it has a few caveats, even for Android users. For one, Opera Max doesn’t compress encrypted data, which is good in terms of security, but also means you’re losing out on the benefits if most of your usage happens over encrypted lines. Second, it’s not available yet for Android tablets. And finally, if you’re keen, you’ll notice it’s only available for Android, with no news of an iOS, much less a Windows Phone, port.