When you just recently released a product or feature that promised to significantly save users some laptop battery life, you would naturally be unsettled when, out of nowhere, someone suddenly claims to have an even better “regular” product. That is probably what browser maker Opera felt when Microsoft surprisingly published a blog post that extolled its own Edge browser‘s battery efficiency. Now Opera is refuting Microsoft’s claims by presenting its own hard evidence of how Opera’s new power saving feature trumps them all.

Opera calls Microsoft’s post as a “huge PR effort”, but then again almost everything is these days. What Opera is doing different this time is to (somewhat) provide more details on the scientific process it used to pit one browser against another. It subtly criticizes Microsoft for not detailing what it did so that others could replicate it, leaving Opera to resort to its own in-house techniques. In this case, that involved automatically loading pages and automating user interaction, like scrolling through pages, watching videos, etc. 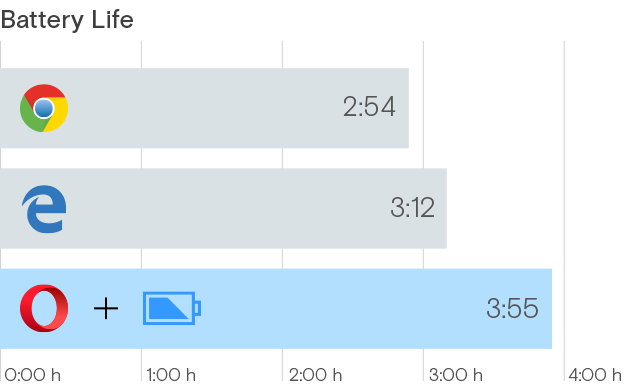 In its defense, Microsoft never mentioned if it turned on Opera’s power saving feature when it did its own tests. Considering Edge doesn’t have an equivalent, we can only presume it didn’t. Opera’s new post also doesn’t show its browser’s performance with Power Saving turned off. When it first announced the feature, it did so and it showed the without it, Opera fares only a little better than Chrome.

This “he said, she said” battle of battery tests is admittedly amusing to watch, especially considering neither Opera nor Microsoft actually specifically called out the other. In fact, if you think about it, both tests painted the same browser as having the worst battery performance: Chrome. Google has yet to offer its own scientific proof to refute these claims.