The Nintendo Switch is the ultimate portable gaming console. And no, we don’t mean just a handheld but an honest to goodness console that you can plug up to a larger screen and play from your favorite couch. When you do the latter, though, you temporarily give up that portability. That is why the folks at Hong Kong-based YesOJO Studio though of creating the OJO so that you could take your TV with you anywhere and not even worry about power. All you need is a flat, white wall to project on.

Technically speaking, the OJO is a mini projector that comes with built-in speakers and a 20,400 mAh battery. While that combination isn’t exactly new, none of the existing pico projectors also pull double duty as a dock for the Nintendo Switch. In other words, it’s the ultimate portable living room setup for the handheld console. 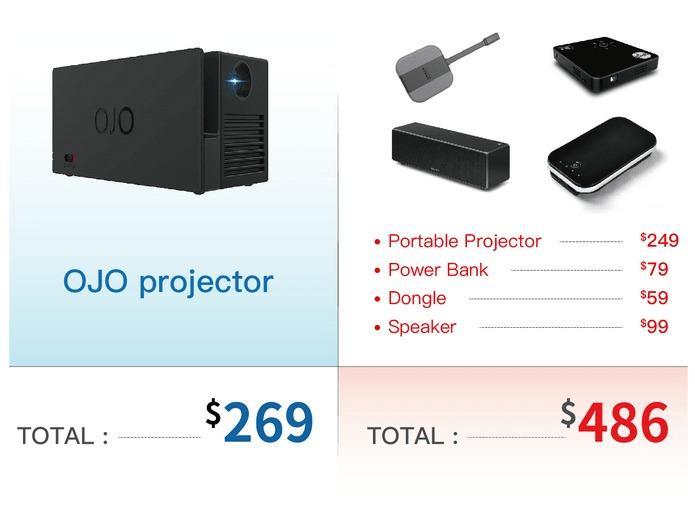 It might seem an odd idea, especially when you consider that playing outside the comfort of your living room isn’t exactly, well, comfortable. But when the need does arise, you won’t be at a loss. Plus, it makes for a good way to boast of your gaming prowess with friends without having all your heads crammed together to watch a small screen.

That said, the OJO will not be a perfect TV replacement naturally. It can project a screen of 30 to 120 inches in size and at 200 lumens. It sports an 8 ohm 5 watt speaker for its own audio. Those, however, might not be good enough for projecting in anywhere but a dark room, which sort of nullifies the advantage a bit. Plus its 800 g weight means you’ll be carrying the equivalent of a 13-inch tablet with you all the time.

The biggest catch is that the OJO is an Indiegogo project. While it has already reached its modest $30,000 goal with a month to spare, it is never a certainty that they will be able to ship in time, or at all. But if you do find yourself always on the go and hoping you had a quick and convenient way to play on a larger canvas, then the OJO might indeed be the only way to go.