Despite numerous attempts to kill it, the venerable email still remains one of the most-used forms of digital communication today, especially in businesses. Although relatively more secure than that other ancient messaging technology, SMS, email has its own set of flaws that are triggered even by well-intentioned users. One such problem is known as a Reply-All Storm and Microsoft Office 365 is now implementing a way to prevent that from taking down the company’s email servers.

When you’re working for an organization with hundreds or even thousands of employees, it’s not unusual to receive an email that is addressed to all. Given how email clients both on the Web and on desktops have become so easy to use, it’s almost too easy to hit that “Reply All” button. Now imagine if even 10,000 employees all send a reply to the other 9,999 employees and you pretty much have the idea of how much of a strain such an email storm can be on the company’s email server.

No one, not even Microsoft, is immune to that and Redmond itself experienced first-hand how devastating a Reply All Storm can be. That’s why it promised at Microsoft Ignite last year that it would on a Reply-All protection system and after suffering another outage two months ago, it’s finally rolling it out to Office 365 customers.

It won’t block Reply-All’s outright but the protection will detect if there have been 10 such storms over 5,000 recipients in the last hour. If that condition has been triggered, it will block all replies to that thread for the next four hours and send an NDR (Non-Delivery Report) to the unwitting user who tried to reply to a gigantic distribution list. 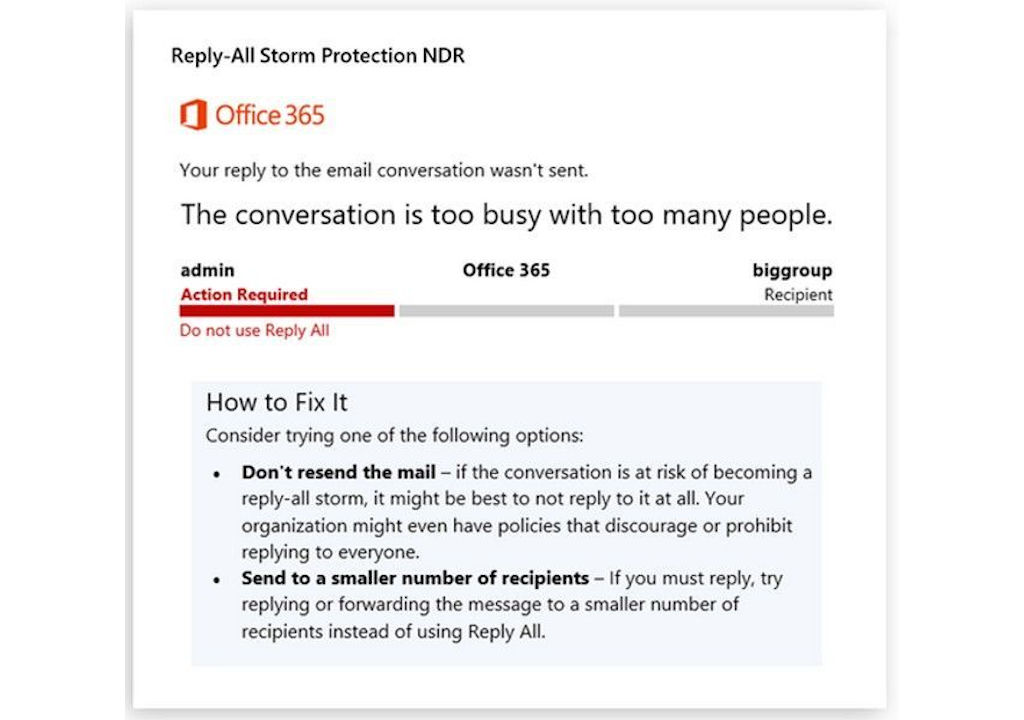 As a server-side measure, it goes without saying that it will only apply to emails sent through the company’s Office 365 instance. It’s not going to protect the company or its employees from accidental Reply-All’s or, worse, accidental forwarding of emails that contain the entire company’s address book.