Although single board computers or SBCs have been existence for a long time, the Raspberry Pi really ushered in a new era by democratizing such boards, making them available at extremely affordable prices. Since then, many have tried to emulate that success and offer hackers, modders, tinkers and all sorts of DIY fans boards of varying power and prices. Hardkernel’s new Odroid-C1 is one of those, though it has one clear, but not clearly advertised, advantage: it’s input/output pins are compatible with Raspberry Pi’s.

That advantage is a subtle yet crucial one. Being mostly compatible with RPi means that the Odroid-C1 will be compatible with the myriad of sensors, connectors, and other sorts of oddities that have bloomed around the highly popular Raspberry Pi. That means that there should be less reluctance to move from RPi to Odroid-C1 since most will work out of the box. There are 40 pins on the Odroid-C1, similar to the RPi model B+ announced last July. Hardkernel, however, indicates that three pins, namely 37, 38, and 40, are not compatible as they are reserved for analog input. 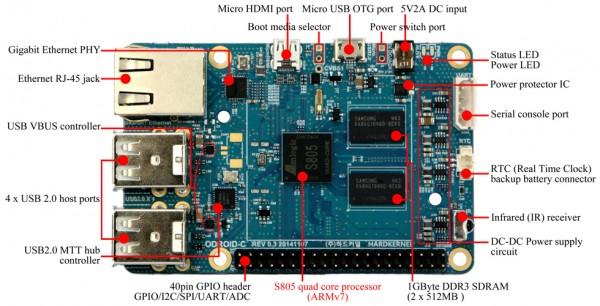 In almost all other aspects, the Odroid-C1 sells itself as a better RPi. After all, despite its popularity, the RPi has not taken any substantial jump forward in terms of specs, which is both part of its appeal (less power draw, for example) but at the same time a sort of Achilles’ heel. In contrast, the Odroid-C1 packs quite a punch, running on a 1.5 GHz quad-core Amlogic chip with a Mali-450 GPU, the same GPU used in mobile chips like Allwinner’s. RAM is at 1 GB and there are options for adding either eMMC or micro SD storage. There are 5 USB 2.0 ports, for of which can be used for host mode and one for OTG. HDMI video and audio are supported. There’s a gigabit Ethernet port and it can support a 720p USB camera. 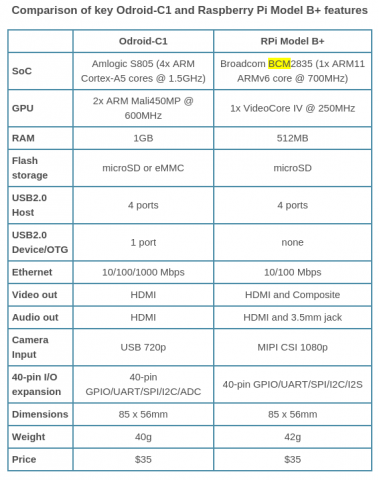 The Hardkernel Odroid-C1 measures only 85×56 mm, exactly the same size as the RPi. It comes with an equally small price tag of $35, exactly the price of an RPi Model B+. Hopefully this board will actually stick around much longer, unlike its Odroid-W predecessor that was discontinued, supposedly because of a shortage of Broadcom’s BCM2835 processors..