The creator and master of Minecraft, Markus “Notch” Persson, is only human. As such, it would appear that his interest (or disinterest) in holding a grudge against Oculus for their Facebook agreement is officially expired, making way for a Minecraft port from source to the world of virtual reality. The beacons have once more been lit.

An official release of Minecraft for virtual reality headsets would not be the first attempt at such a build in the wild. Attempts like “Minecrift” have made unofficial builds from the basic Minecraft launcher. This mod is even “personally endorsed” by Persson, making it the closest thing to the real-deal you’ll see before the real-deal is released.

This week Persson decided he was “officially over being upset about Facebook buying Oculus.” He went on to note that he was now “upset about there being a hold in [his] favorite sock instead.” 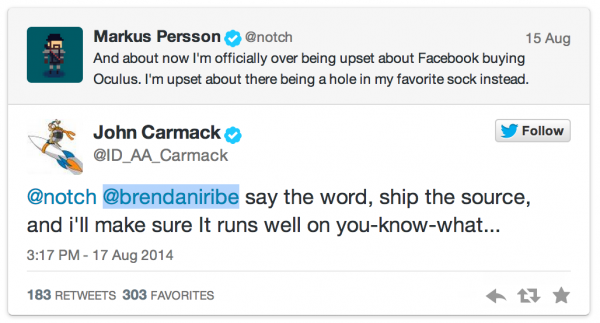 A response was also posted by Doom developer and current Oculus VR chief technology officer John Carmack. He tapped Brendan Iribe, Oculus VR CEO, and Notch with a note: “Say the word, ship the source, and I’ll make sure It runs well on you-know-what…”

In the common tongue, that means that if Persson wishes, he can simply ship a file to Carmack and he’ll get it working on Oculus Rift, making it work as well as it possibly can right our of the box. Let the development begin (or continue, depending on where we are at this point!)