Octopus arms are laced with a special chemical that stops their hundreds of suckers sticking to themselves, researchers have found, allowing their flexible limbs to act semi-autonomously in ways that could have implications for tomorrow’s robotics. The average octopus has nearly 2,000 suckers across its eight arms, but despite the potential for tying itself up in sticky knots, it never actually does. Now, we know why that’s the case.

The research, carried out by Nir Nesher, Guy Levy, Frank W. Grasso, and Binyamin Hochner, describes a chemical-based self-recognition system the octopuses use to autonomously identify which are their own limbs.

By putting samples of octopus skin on other objects, the team was able to show that the animal would not grab them. When objects were partially covered, the octopus would grab the uncovered parts but avoid the skin. 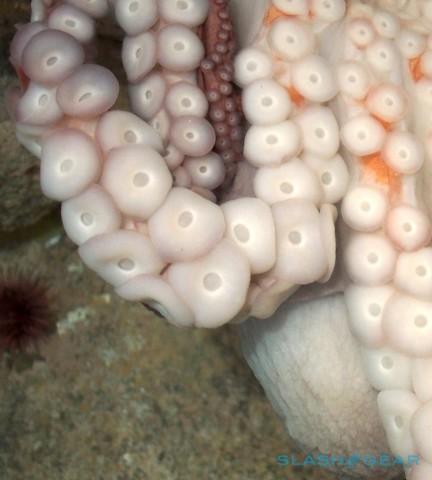 However, while the proclivity toward avoidance of skin from its own species seems autonomic – i.e. the octopus brain does not need to actively differentiate between materials – it can also be overruled if it’s in the animal’s best interest. Faced with a tasty torn-off tentacle from another octopus, and the test subjects ignored the chemical marker and snatched up the tidbit to eat.

However, they continued to ignore their own detached limbs, refusing to consume them.

It’s not the only biological shortcut that octopuses rely upon to make moving more straightforward, the researchers point out. For instance, while the potential for movement and positions of an octopus limb is effectively infinite, in actual fact the animals only follow around three.

Those “stereotypical motion patterns” can be coded into the motor programs within the arms, and merely triggered rather than fully instructed each time by the brain, reducing cognitive load.

As both the study’s authors and National Geographic’s Ed Yong points out, the research may be focused on the animal world, but it could have implications for smarter robotics.

“The concept of embodied organization, proposed as a tool for designing autonomous robots, is that adaptive behavior emerges from the reciprocal and dynamic interactions of sensory and physical information among body, controller, and environment. In this form of organization, in contrast to hierarchical organization, the system functions as a whole, as it allows self-organizational processes to set the relevant dynamic properties of the elements building up the system – the embodiment. In robotics, this approach has led to the emergence of adaptive behavior by a robot in a specific environment” N. Nesher, G. Levy, F, W. Grasso, and B. Hochner

In short, by spreading the robot’s intelligence throughout its construction, rather than relying on a single, centralized processing hub that keeps overarching control of the entire system, robots could be more efficient and more flexible.

Researchers are already experimenting with robotic octopuses, but the tech needn’t be tentacle-based.

Rather, any robot with multiple components – whether it be bipedal or otherwise – could allow each subsystem to react to its environment of its own accord, with the “brain” more of a manager-of-divisions than attempting to micromanage the whole process.