As it has been for many moons with the Tegra-enhanced Android universe, so too does Windows RT get the NVIDIA TegraZone treatment: a listing of games made great for your Tegra processor-toting tablet! This listing of games opens in an extremely simplified display with touch-friendly pushing and pulling in mind. What you’re getting here is a guide to games that will work fabulously on your device that’s working with both Windows RT (that Windows 8 operating system made for your tablet specifically) and an NVIDIA Tegra 3 processor under the hood – like the Microsoft Surface with Windows RT, for example – hot stuff!

The NVIDIA TegraZone being available for Windows RT means that NVIDIA will be pushing developers to their limits with a cross-promotional bit of excellence on all Tegra 3-toting devices. If you’ve got a Windows RT tablet with Tegra 3 (regardless of manufacturer), you’ll have a precise collection of games ready and waiting for you to peruse that you’ll know were made with your device in mind. In many cases, this means that the game has features above and beyond what it’d have working with any other processor-toting device. 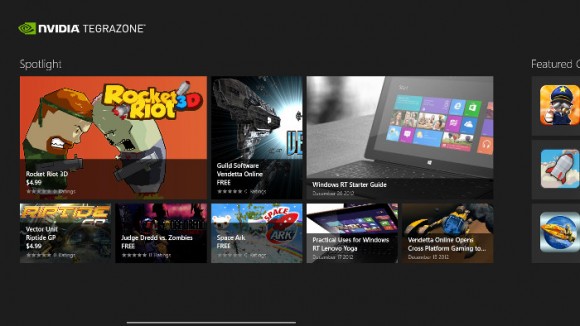 Here at the launch of the NVIDIA TegraZone for Windows RT, you’ve got a selection of the following awesome collection of games: Judge Dredd vs Zombies, Pinball FX 2, Reckless Racing Ultimate, Riptide GP, Soulcraft, Space Ark, Sprinkle and Vendetta Online. Each of these games is offered for sale in the Windows Store but through the TegraZone is detailed with Tegra-only enhanced features. These features include enhanced physics in water, smoke, and cloth, dynamic lighting and particle effects – and more!

As it was with the original NVIDIA TegraZone, this version of the interface is made for the current most fabulous Tegra processor, but will keep up-to-date with the best of the best in the future. That means here that while the Tegra 3 quad-core processor is king (and has been throughout 2012), we’ll likely see a new beast from the NVIDIA crew for mobile devices in 2013 – currently code-named Wayne, as it were. Keep an eye out! Once that processor is out, developers working with NVIDIA will still be busting out the best of the best, so the TegraZone is up on the greatest no matter when you see it!

The most important part of this whole equation is the relationship that the folks at NVIDIA have with the developers behind these hard-hitting games, and the amazing apps they create as a result of said relationships for you, the user. You can download the TegraZone app from the Windows Store right this minute – have at it!

Also have a peek at the TegraZone path that’s been forged on SlashGear in a small sampling from Slashgear in the timeline below for Android – and hit our own NVIDIA [Tegra Portal] to take in the full NVIDIA Tegra environment, top to bottom!