It is a well known legal tactic, especially between companies, for one to fight back a lawsuit with a countersuit. So when NVIDIA sued Samsung and Qualcomm last September, in what it claims to be the first patent suit it has ever filed, it fully expected Samsung to hit back with a suit of its own, which it did this week. But what it didn’t expect was for Samsung, in the same lawsuit, to accuse NVIDIA of falsely advertising its Tekgra K1 as “the world’s fastest mobile processor”.

It also isn’t unheard of for companies to use the courts as a venue for marketing. Apple and Samsung did it for the sake of “innovation”. US carriers often do it when competing for the title of “fastest network”. Now Samsung is using the same tactic, trying to use the court as a stage to claim that its Exynos 5433, the one found in its new Galaxy Note 4, is actually faster based on a couple of benchmarks. While NVIDIA is still preparing its formal legal reply to Samsung’s lawsuit, it couldn’t just take this particular accusation sitting down.

NVIDIA published a chart pitting the SHIELD Tablet running the Tegra K1 against the Galaxy Note 4 running the Exynos 5433, both straight out of the box. The battery of tests involved over a dozen benchmarking suits just to prove the point. Of course, some might say that the results come from NVIDIA so it could be biased. Those who actually own both devices are more than welcome to try and reproduce these results. It should be noted that though the Exynos 5433 is technically a 64-bit chip, it is only running in 32-bit mode on Galaxy Note 4, so it should be running on the same instruction set as the 32-bit variant of the Tegra K1 on the SHIELD Tablet. 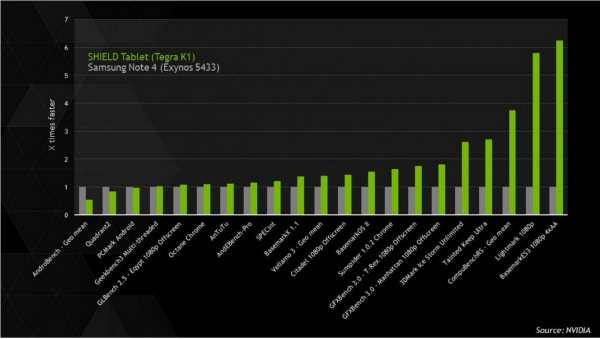 NVIDIA also notes that Samsung dragged one of its customers, Velocity Micro, into the lawsuit for no other purpose than to keep the suit inside the State of Virginia where that company is based. That jurisdiction apparently has a distinction for having a faster time to trial than any other in the US. Unfortunately, Velocity Micro is also supposedly one of the smallest companies in Virginia, and NVIDIA will most likely end up trying to support it throughout the legal proceedings. Samsung claims eight patents have been infringed, with NVIDIA violating six and Velocity Micro all eight.