NVIDIA has outed its latest graphics card, and the company has Apple Mac Pro users firmly in its sights. The NVIDIA Quadro 4000 for Mac packs 256 CUDA cores and 2GB of GDDR5 memory, which connectivity includes a DisplayPort and a DVI-I (Dual Link) connector built into its bracket, and an optional 3D stereo bracket; NVIDIA also throw in a DisplayPort to Mini DisplayPort adapter.

The company reckons that, with its new NVIDIA Scalable Geometry Engine, the Quadro 4000 for Mac can process up to 890 million triangles per second. That’ll show its hand in supported apps like pple Final Cut Pro, DaVinci Resolve, Autodesk Smoke, Mathworks Matlab and Adobe Creative Suite 5, for image and video processing.

It’ll also work in Windows apps running under BootCamp, and if you have a pair of cards you can have four displays running simultaneously. Unsurprisingly, all this performance doesn’t come cheap. The NVIDIA Quadro 4000 GPU will be priced at $1,199 when it arrives later this month. 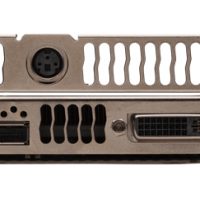 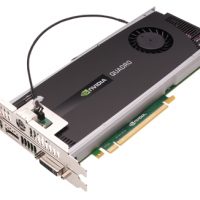 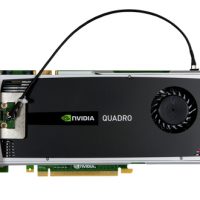 For professional users operating on Mac OS X Snow Leopard, this means the wait is over. The NVIDIA Quadro 4000 graphics processing unit (GPU) for Mac is optimized to accelerate workflows and drive a range of top professional applications. For example, the Adobe Mercury Playback Engine in Adobe® Premiere® Pro CS5 software leverages NVIDIA CUDA™ parallel processing technology to enable film and video professionals to work unconstrained. Other examples include visual effects and image processing applications from The Foundry, including NUKE and STORM, and MATLAB from MathWorks.

The Foundry is a leading developer of visual effects software for film and broadcast.

“The Foundry’s software has been used to help create visual effects for many Hollywood blockbusters, including ‘Avatar,’ ‘Alice in Wonderland,’ ‘Harry Potter,’ ‘Iron Man,’ ‘Star Trek,’ ‘District 9,’ ‘2012,’ and ‘Transformers,'” said Bruno Nicoletti, Founder and CTO, The Foundry. “The Quadro 4000 is a powerful GPU blockbuster for the Mac.”

MathWorks MATLAB is a high-level technical computing language and interactive environment for algorithm development, numeric computation, data analysis, and data visualization, all of which benefit tremendously from fast double precision, a unique Quadro 4000 GPU for Mac feature. Graphics features, including 2-D and 3-D plotting functions, and 3-D volume functions required to visualize engineering and scientific data, are available in MATLAB.

“The visualization features in the Quadro 4000, coupled with GPU-accelerated computation for algorithm development and deployment with MATLAB and Parallel Computing Toolbox, are a powerful combination of capabilities for the Mac platform,” said Silvina Grad-Freilich, manager of parallel-computing marketing, MathWorks. “We are pleased that our Mac users will be able to leverage Fermi-grade computational performance in their applications.”

The Quadro 4000 GPU for Mac also provides additional display flexibility through a DisplayPort and a DVI-I (Dual Link) connector built into its bracket, and a 3D stereo bracket for optimal stereo connection to the system. A DisplayPort to mini-DisplayPort cable is also included to enable mini-DisplayPort only Apple displays. Additionally, users can enable up to four high resolution displays from a single Mac Pro using dual NVIDIA Quadro 4000 for Mac boards.

Availability and Pricing
The Quadro 4000 GPU for Mac ($1,199 MSRP, USD) is available this month at Apple.com, select Apple resellers and system integrators, and from authorized distribution partners including: PNY Technologies in the Americas and Europe, ELSA in Japan, and Leadtek in Asia Pacific.

About NVIDIA
NVIDIA (NASDAQ: NVDA) awakened the world to the power of computer graphics when it invented the GPU in 1999. Since then, it has consistently set new standards in visual computing with breathtaking, interactive graphics available on devices ranging from tablets and portable media players to notebooks and workstations. NVIDIA’s expertise in programmable GPUs has led to breakthroughs in parallel processing which make supercomputing inexpensive and widely accessible. The Company holds more than 1,600 patents worldwide, including ones covering designs and insights that are essential to modern computing. For more information, see www.nvidia.com.