NVIDIA has revealed G-Sync, a new module for gaming monitors that, when used with a GeForce GPU, helps avoid tearing and skipping. The new hardware, shown off by NVIDIA CEO Jen-Hsun Huang at the company’s Editor’s Day in Montreal, works around the limitations of V-Sync, the system by which monitors currently deal with changing refresh rates, by setting up a path of direct communication between display and graphics card and synchronizing the refresh rate of both together.

As gamers know, frame rates during play can change considerably, and that can leave monitors looking blurry or tearing. V-Sync currently works by effectively locking the graphics card to a single refresh rate depending on the capabilities of the display itself: so, if the display is running at 30Hz, and the frame rate is 30fps, then the GPU won’t push any new data to the panel until it knows it has cleared the old cycle.

This, though, can lead to judder or input lag, and also means gaming monitors and GPUs are limited to a small number of refresh rates. NVIDIA’s new G-Sync module, however, works around that by dynamically adjusting the refresh based on the capabilities of both screen and GPU, doing so in real-time to effectively remove any stutter and significantly reduce lag. 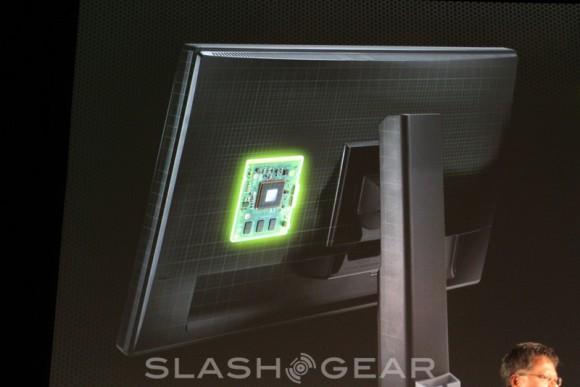 The new module will be added to monitors by ASUS, BenQ, Philips, and ViewSonic initially, with NVIDIA name-checking all four brands during its event. However, the company is hoping that it becomes more commonplace in general, though of course you’ll need an NVIDIA GeForce GPU – based on a Kepler chip – in order to actually take advantage of it.

No word at this stage as to exactly how much it might add to the cost of a display, though we’re spending some hands-on time with G-Sync now and will know more soon. There’s more from NVIDIA’s event in our hub.