If you read SlashGear often, you’ll find yourself stumbling across car automation articles ever so often. At CES, NVIDIA is announcing their new platform for connecting your car to it surroundings, which they’re calling Drive PX. the platform is resoundingly powerful, and NVIDIA believes it has a keen eye on the future. Drive PX utilizes cameras rather than other technologies like ultrasound or radar, and gets your car to become “self aware” via learning and a “deep neural network”.

Drive PX can process 2.3 Teraflops via its dual Tegra X1 processors. It relies on 12 camera inputs from around your vehicle, processing at 1.3GPix/sec.

Via that amazing Tegra X1 you’ll get its powerful GPU, which NVIDIA believes will be key to recognizing images grabbed via the camera. That’s essentially how the computer will learn and feed info to the neural network. 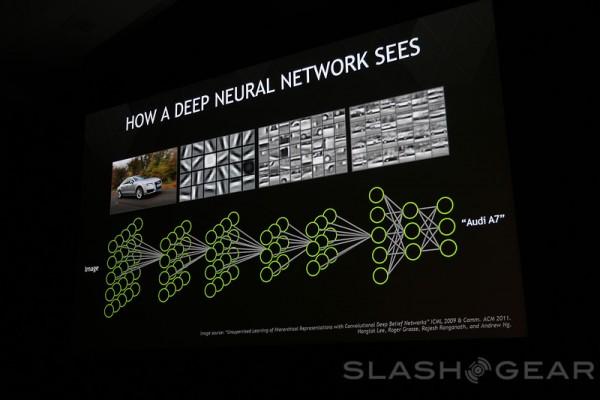 Through imaging and recognizing objects around it, the neural network gets better over time. Pedestrians and types of vehicles are eventually imagined as being recognized, which could be handy for those times your car sees things ahead of you. It’s also ideal for things like crosswalk signs, where you vehicle could recognize the sign and become hyper-aware of pedestrians.

In an even cooler example NVIDIA showed how their Drive PX can identify traffic cameras as well as traffic slowing ahead of you. If it says slow down, you’ll probably want to trust it.

We’re still here with NVIDIA at CES, so please do stay tuned for all your news about what they have in store for our future, which is where they’re focussing.