China-based Nreal wants to make a permanent place in everyday life for its ready-to-wear, mixed reality glasses (MR). Recent tweaks in the design and development of the AR smartglasses were revealed at Mobile World Congress in Barcelona, Spain.

Holographic video conferencing sitting in the back of taxi is appearing closer to a mass consumer market reality as nreal, the small AR startup that has acquired $31 million USD in funding, tries to find the sweet spot between form and function: the groundbreaking nreal light mixed reality glasses are compact with small form factor, and doesn’t sacrifice brilliance of display.

The futuristic spectacles sport a sunglass-like design, weighing a mere 85g and recently updated with foldable legs for better portability and more natural look and feel. Stylish shapes, funky colors, and magnetic nose pads offer personalized fit and relative comfort. The glasses can customize to your eyesight with interchangeable prescription lenses that can embed or snap on.

High resolution and vivid optical display mixed reality content can be streamed on the go with the complete system: glasses, CPU (nicknamed “toast”) and controller – debuted at CES 2019 and priced around $1000.

However, in their quest to make AR smartglasses more accessible and affordable to the public, the nreal light can now also plug directly into any 5G enabled smartphone running a Qualcomm Snapdragon 855 chip via USB Type-C. The the product is planned for launch in Q3 2019. 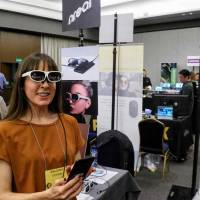 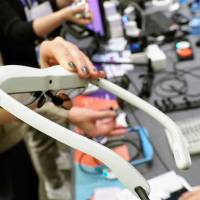 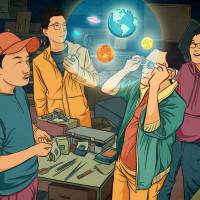