As you’ve seen from our first hands-on, Notion Ink’s Adam tablet is a pretty smooth operator, but we wanted to see just how smooth. The company allowed us to load up an Android benchmarking app to see how the slate performs, but there are a few caveats to bear in mind.

We ran Quadrant Advanced on the Adam, and the Tegra 2 powered slate scored 1,836. Now, before you panic, you have to remember that Froyo hasn’t been optimized to take advantage of multithreading, so the number isn’t going to be fully representative of real-world performance. It’s an issue we’re going to see increasingly with dual-core devices like the Motorola ATRIX 4G and LG Optimus 2X. 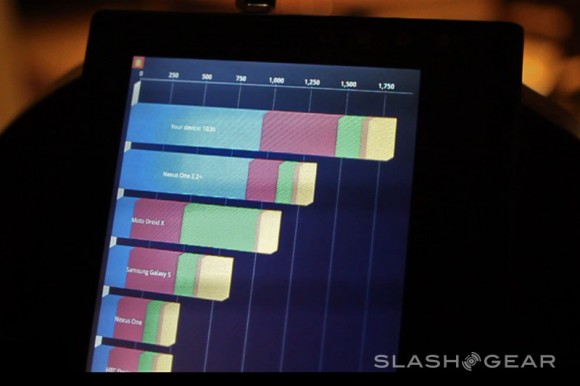 On top of that is Notion Ink’s own Eden multitasking system, which doesn’t use parallel processing – instead, it only kickstarts the second core when the first core is full loaded. That helps battery life, by minimizing power consumption when two running cores aren’t essential, but it doesn’t do Adam any favors when it comes to on-paper benchmark results. The short of it is, though, that this is one slick, fast-moving tablet, and Notion Ink has done its homework getting the customizations working well.