Nokia’s PureView ad may not be entirely honest

Earlier today, Nokia announced the Lumia 920, which comes complete with a reboot of PureView. During its press event, Nokia gave us a look at the new PureView’s main feature: optical image stabilization. The idea behind OIS is that it stabilizes the video you’re recording, giving you a more professional look instead of the amateur (and sometimes nauseating) shaky-cam effect.

Or is he? Toward the end of the video, our blonde-haired subject passes by a parked trailer. When she does, we see the reflection of a white van keeping pace with the girl in one of the trailer’s windows. When the video is paused at exactly that point, we can see what appears to be a cameraman recording the scene with something that definitely doesn’t look like a Nokia Lumia 920, along with a lighting rig at the front of the van to make sure that the shot is perfect. Have a look at the screen capture below to see for yourself. 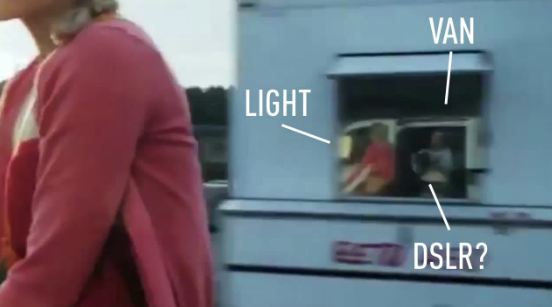 So, it seems that Nokia’s ad may have been helped along by the work of a professional cameraman and crew. Keep in mind though that it’s possible the cameraman was actually using a Lumia 920 in some kind of rig, which would make it appear to be a different type of camera. It’s also important to remember that we’ve already seen optical image stabilization used in other devices, which should give us a good idea of how it functions with the Lumia 920. Still, this revelation does shed a little bit of doubt on the idea that Nokia’s OIS implementation is amazing as it appears in the video. What’s your take on the whole situation?