Nokia Z2 Plus spied on Geekbench

The Nokia name has been in the news a lot over the last few weeks. Yesterday some new Android devices from Nokia turned up in a leak with the launch of the devices tipped for February. Today another Nokia smartphone called the Z2 Plus has turned up and we know some of the specs of the device thanks to Geekbench.

The Z2 Plus was captured back on December 13 and it racked up a 2156 single-core score and a 5217 multi-core score. The benchmarks were run on Geekbench 3.2.1 for Android. The OS is listed as Android 6.01 with the processor called out as a Qualcomm’s ARMv8 running at 1.77GHz with four cores. 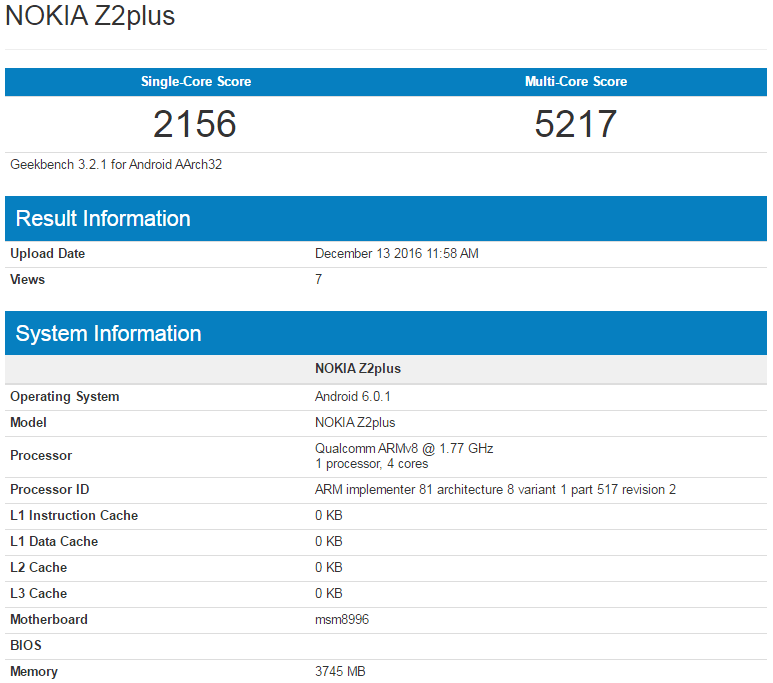 Processor ID lists an ARM implementer 81 architecture 8 variant 1 prt 517 revision 2 under the hood. The benchmarks list 4GB of RAM. If you don’t frequent the benchmarks, the scores indicate that this will be a high-end device. The chip is expected to be a Qualcomm Snapdragon 820, the motherboard was listed as a MSM8996 in the benchmarks.

However, the is a chance that the Snapdragon 821 could be used. The two devices that turned up in the leak yesterday include the Codename P device tipped to use a Snapdragon 835 processor and 6GB of RAM. It was also tipped for a 23MP Carl Zeiss camera. The other device in yesterday’s leak was the D1C packing a Qualcomm 430 processor and 3GB of RAM. This device is tipped for a 1080p display and 32GB of internal storage along with a 13MP rear camera. Nokia is expected to show off its new Android wares at MWC in February.