Nokia’s N9 has crossed the FCC and, as is traditional, splayed its guts for all to see. Unsurprisingly, Nokia has had to do a lot of work to get everything to fit inside its narrow polocarbonate casing, though the N9 still gets pentaband WCDMA connectivity when rivals are still bumbling along with support for a mere two or three bands.

In addition to the teardown shots – which spread the 1GHz TI OMAP3630 processor, 8-megapixel camera and non-user-accessible battery across the FCC’s test bench – there’s a 113 page user manual if you want to brush up on your MeeGo before you grab the N9 itself. With ease of use Nokia’s primary goal, however, you should be able to dive straight in without troubling yourself with its pages.

Official release dates for the N9 – as well as where, exactly, the smartphone will go on sale – are still unknown, with Nokia only saying that the handset will arrive later on in 2011. The company would do well to launch it sooner rather than later, however; dire financial results including an almost €500bn loss announced yesterday have done little to enthuse investors.

If you prefer your smartphones to be in one piece rather than deconstructed, check out our hands-on preview with the Nokia N9. 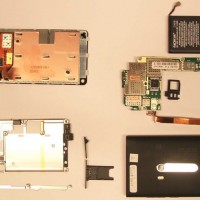 [via My Nokia Blog]