Nokia has revealed its new Asha series, the company’s four-strong Symbian range intended for developing markets, entry-level users and anybody whose mobile ambitions might exceed their budgets. The Nokia Asha 200, 201, 300 and 303 run S40 on a range of form-factors that includes QWERTY keyboards and full touch.

The Nokia Asha 200 has a QWERTY ‘board in a candybar form-factor, in addition to multi-SIM support and multi-swap, allowing users to move between different SIMs without rebooting the phone. The Asha 201 has the same specs but lacks dual-SIM. Both can be used with up to a 32GB microSD. 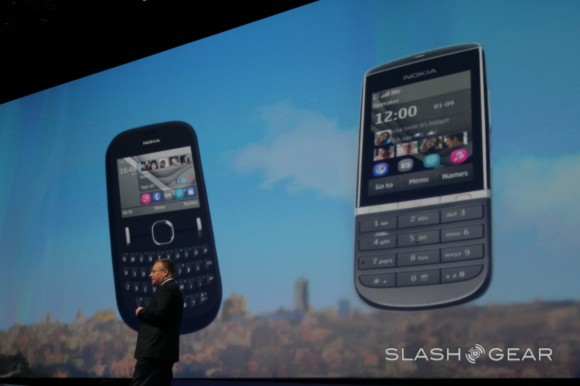 The Asha 300 has a touchscreen and numeric keypad, along with a 5-megapixel camera in a candybar form-factor. Inside there’s 3G and WiFi, along with a 1GHz single-core processor. There’s a homescreen widget for social networking integration, as with other Asha models, and Ovi Store apps access, together with Nokia Maps preloaded. The Asha 303 meanwhile has similar specifications but a QWERTY ‘board instead.