When HMD Global took over the reins of launching Nokia phones, it promised to stand apart from the crowd not only through its pricing but, perhaps more importantly, through its commitment to software updates. In addition to sticking to a stock Android experience, the company promised fast and timely updates as they come. That may have been more or less true for most monthly security updates but, as this now pulled rollout roadmap for Android 11, HMD might be having a bit of a problem catching up with major Android releases.

A now-removed tweet from Nokia Mobile boasts of the 1,000 updates it pushed in the past 3 years, which probably covers those security updates per device out in the wild. It has yet to actually start the process for Android 11 that was just released earlier this month. Fortunately, Neowin was able to grab a screenshot for posterity’s sake before the tweet was taken down.

Only three Nokia phones will see an Android 11 update this year, namely the Nokia 2.2, 5.3, 8.1, and 8.3 5G. The bulk of the updates will occur in the first to second quarters of 2021, covering many second to fourth-generation models. The holdouts, however, will be the Nokia 1 Plus and Nokia 9 PureView, the latter considered to be Nokia’s nominal flagship, which won’t receive Android 11 until Q2 2021. 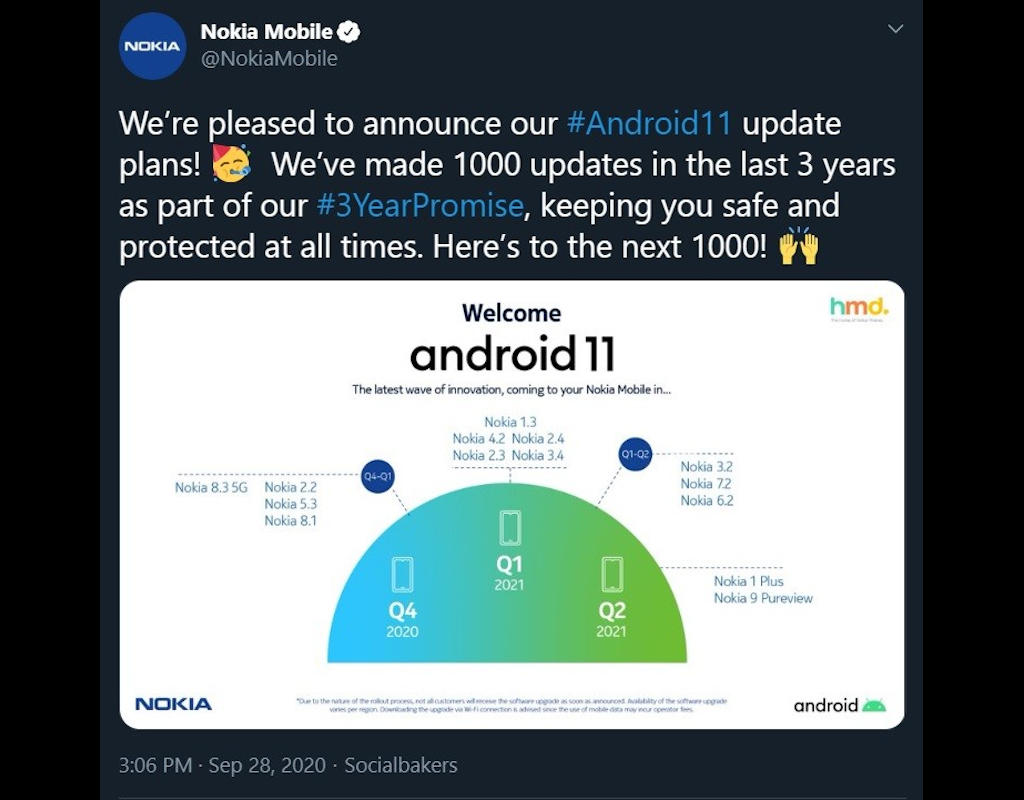 Of course, those not included in the list, such as the Nokia 1 and the Nokia 8 Sirocco, stop at Android 10. Given the oldest phone in the list is two years old, it still neatly falls into the standard two-year support period.

Although the timetable, which could still change, hits at late dates, that isn’t really out of the ordinary in the Android world. Therein, however, lies HMD Global’s problem. For a company that promises to do better when it comes to the Android software experience, having a schedule that’s just as late as everyone else isn’t really reassuring.