E-paper smart watch and Kickstarter record-breaker Pebble won’t work with the iPad out of the box, company founder Eric Migicovsky has confirmed, though the limitation doesn’t look to have slowed demand for the gadget. Migicovsky revealed the omission in a reddit “Ask Me Anything” thread, as well as confirming that all of the currently 85,000-strong pre-orders will come with anti-glare and anti-scratch coatings to their plastic fascias.

Also among the questions were queries around color e-paper, which Migicovsky says we shouldn’t expect any time soon, and whether the September ship date initially suggested – back when the Pebble team expected to produce maybe 1,000 watches – is still on track. It is indeed, Migicovsky says, with units going from production line to customers in the order they were backed.

Migicovsky also shared a photo of the first Pebble prototype, below, using an Arduino and some similarly cobbled-together hardware. That was four years ago, he says; now the Pebble team consists of ten people and, currently at $9,737,000 at time of writing and with nine days yet to run, the Kickstarter is well on track to comfortably exceed $10m and maybe even hit closer to $12m before it closes. 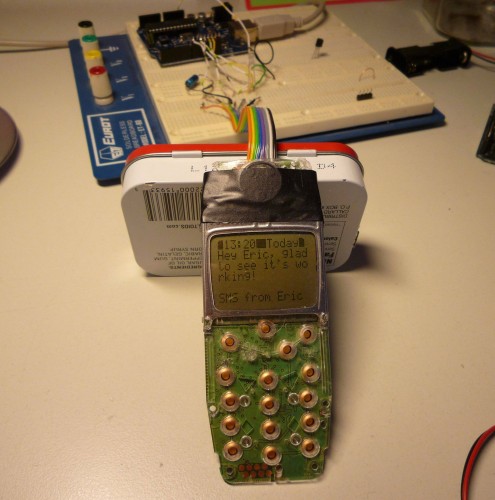 Other tidbits include 7+ days of predicted battery life, support for any Android device running OS 2.3 or above, and specifications on the e-paper display itself, which is a 1.26-inch Sharp Memory LCD running at 144 x 168 resolution. Still no iPhone SMS support thanks to Apple’s own software limitations, however.