Nissan made a glow-in-the-dark Leaf

Sure, you’ve got headlights for when it’s cloudy, raining, and night time. That doesn’t mean you’re as visible as you’d like to be, and if someone fails to notice you’re there, it’s probably going to end in a wreck. Then there’s the issue of finding your car in a dark parking lot a couple hours after you parked and when, coincidentally, you can no longer remember whether you’re in row 6 or 9. Enter glow-in-the-dark automotive paint, something that makes you car stand out in a bright, yet gentle, way.

Nissan has painted its Leaf EV car with UV-absorbing (“glow-in-the-dark”) automotive paint, something that is said to be a manufacturer first. The paint is called Starpath, and it creates the effect you see in the video (and gallery) below: a car that looks ordinary during the day, but glows with a subtle brightness when the sun goes down.

The paint will glow for between eight and ten hours at night once the sun goes down, which means it’ll probably be glowing during your after-work festivities but won’t yet be glowing if you leave for work before the sun rises.

This sprayed coating might end up being an official Leaf EV option, but that isn’t entirely clear: Nissan hasn’t said whether it plans to make this a formal option, of if it is just a one-time effort for attention. However, the auto maker has teased that if it were to make this paint available as an option, the glowing effect would remaining for 25 years, largely covering the vehicle’s prime life time. 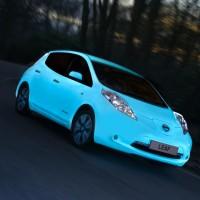 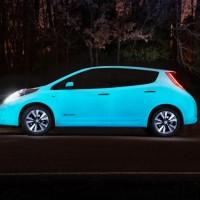 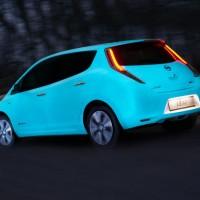 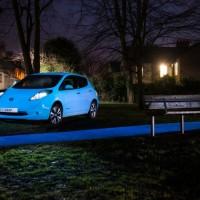 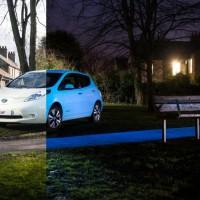