Nintendo have filed a patent for a new touchscreen steering wheel system, which could be used on their DSi handheld for improved racing game control.  The patent describes an interface whereby “at least a portion” of the wheel would be displayed on-screen at all times, and rather than use the DSi’s hardware buttons the gamer could drag the virtual wheel left and right.

Nintendo reckon this is a nifty workaround for handhelds that lack an analog joystick for more proportional control, as well as maintaining a more “realistic” in-game feel than joysticks manage.  The on-screen wheel could be pulled left and right, as is traditional, or it could be linked to other movements and gestures, such as dragging a stylus up or down the display.

There’s even talk of a new peripheral, a combination strap and thumb-stylus that the gamer could wear on their finger for closer, more precise control than the standard pen.  It all seems a little too “obvious” for a patent, at least to us, but then we’re not the USPTO. 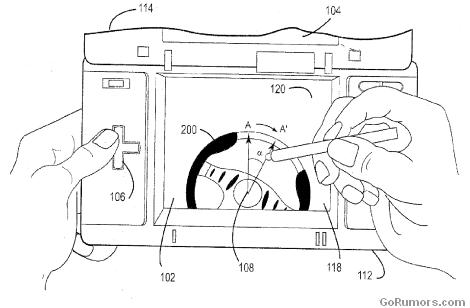