If there’s a way to clearly understand how Nintendo CEO Satoru Iwata feels on expanding their business into the mobile smartphone universe through Android and the iPhone, the tech publishing world has yet to find it. Today we’re having a closer look at the transcript for Nintendo’s recent earnings call, specifically in the (translated) words of Iwata, attempting to decipher what the company really means to do in the near future with their characters, and if they’ll ever appear on non-Nintendo-made smartphones. Turns out he says yes, but he also says no, not a chance.

One thing is for certain – Iwata and the Nintendo board of directors want to expand the reach of Nintendo characters. This means that Nintendo’s licensing of Character IP – their likeness, the things that make them recognizable – will grow. Suggesting that they [Nintendo] “have been actively selling character merchandise for about a year in the U.S”, Iwata goes on to suggest that expansion will be “flexible”.

“Also, we will be flexible about forming licensing relationships in areas we did not license in the past, such as digital fields, provided we are not in direct competition and we can form win-win relationships.

By moving forward with such activities globally, we aim to increase consumer exposure to Nintendo characters by making them appear in places other than on video game platforms.” – Nintendo CEO Satoru Iwata

As for releasing already-made Nintendo titles to mobile devices like the iPhone and Android smartphones and tablets – it’s not looking likely. Speaking rather directly on the matter, Iwata suggested that it’s simply not a smart approach to release Nintendo games on a platform that already has massive amounts of games and apps. Getting lost in that jungle isn’t something Nintendo wants to do.

“We recognize that attracting consumers’ attention among the myriads of mobile applications is not easy, and as I said before, we feel that simply releasing our games just as they are on smart devices would not provide the best entertainment for smart devices, so we are not going to take any approach of this nature.” – Nintendo CEO Satoru Iwata

Strangely – and here’s where things get a little confusing, Iwata also mentions that he has not restricted Nintendo’s developers on the possibility of “making games or using our game characters.” This seems quite different from the Microsoft approach with SmartGlass or the Sony approach with the PlayStation App, both of which offer engaging experiences, but no games directly. Could Iwata be speaking of integration of smartphone controls for games of the future?

“Having said that, however, in the current environment surrounding smart devices, we feel that we will not be able to gain the support of many consumers unless we are able to provide something truly valuable that is unique to Nintendo. Accordingly, I have not given any restrictions to the development team, even not ruling out the possibility of making games or using our game characters.” – Nintendo CEO Satoru Iwata

If that seems quite clear on how Iwata expects Nintendo expand games to the mobile platform, the next line should, once again, throw you for a bit of a wallop in the opposite direction.

“However, if you report that we will release Mario on smart devices, it would be a completely misleading statement.” – Nintendo CEO Satoru Iwata

This full reported transcript we’re working with today also has Iwata suggesting that it’s with apps – or just an ecosystem inside apps – that connect the user to Nintendo that the company will maintain control over their network of characters and machines. 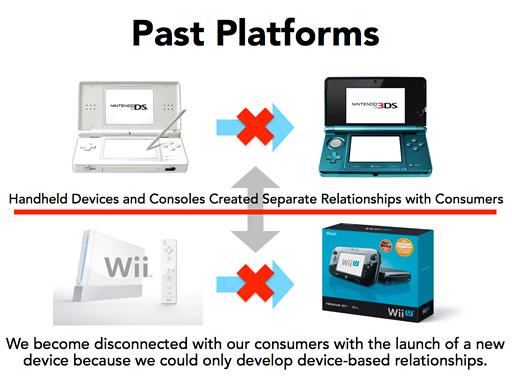 Above you’ll find one of two presentation slides shown by Iwata during his presentation on the 30th of January, 2014. This slide shows how Nintendo has found a break in the dedication shown by Nintendo device owners with the release of the newest wave of hardware. The new consoles do not appear to have been purchased by owners of the old consoles, the same being true of the newest handheld devices. 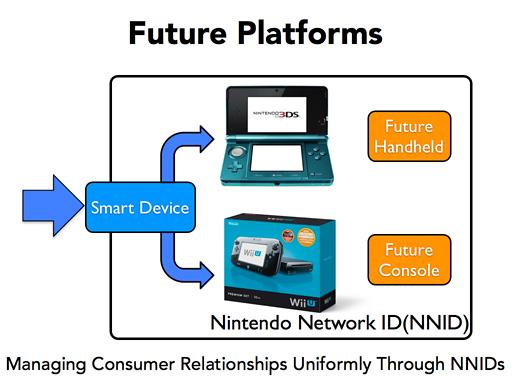 With smart devices – smartphones and tablets – Nintendo will attempt to keep users in the fold with Nintendo Network IDs, aka NNID. With a smart device in a manner much closer to the PlayStation App or Microsoft SmartGlass, we’ll see Nintendo keep a leash, in a manner of speaking, on their users.

Finally there’s a bit tacked on by the Nikkei news source this week that we’re still speaking with Nintendo to get a direct response about. While the news group suggests they’ve interviewed Iwata this week, they’ve very recently been a bit misleading with how they’ve gotten their news breaks on Nintendo specifically – so we must direct you to Nintendo Games Denied: Nikkei Mix-up before you go any further.

Nikkei reported this week that they’d had an interview separate from the main set of Iwata announcements this past week, suggesting that Iwata spoke directly with them about some points that’d change the way Nintendo operates in a big way.

“We’ll change the way we sell products, by managing customer information via the Internet. We’ll offer discounts to steady, regular customers. We’ll cultivate emerging markets and launch new businesses in health and other areas. In an emerging country, you can expand the user base only after you offer a product line different from advanced economies in pricing.

We should abandon old assumptions about our businesses. We are considering M&As as an option. For this reason, we’ll step up share buybacks.” – Iwata to Nikkei

M&A stands for Mergers and Acquisitions, if you did not know, suggesting that either Nintendo is open to buying up new companies and collaborating with them in large ways in the future, or they’re open to being bought. Were going to go ahead and assume it’s the first bit, if either option at all. Again, we’ve reached out to Nintendo for comment.