It’s the DSi on steroids, the portable console for the poorly sighted, for your grandparents, for anyone with big hands and big pockets. On sale in Japan for several months now, the Nintendo DSi XL has only just arrived on North American shores. Not so much a replacement, then, for the DSi as its chubbier sibling; check out the full SlashGear review after the cut.

Compared to the DSi’s 137 x 74.9 x 18.9 mm, the DSi XL measures in at 161 x 91.4 x 21.2 mm and, at 214g, weighs 100g more. All that extra chassis space is mainly dominated by the new screens; each measures 4.2-inches, with the lower panel being a touchscreen and the upper one a plain display. Sat side by side with the DSi the new handheld is perhaps a little brighter, but the main difference is that there’s no squinting involved any more. The sort of older – perhaps glasses wearing – gamers that Nintendo are partially targeting the DSi XL at should find it far easier to read text and make out smaller icons.

In fact, the only downside to the new displays comes by virtue of Nintendo doing nothing to increase resolution. Just like the DSi before it, each DSi XL panel runs at 256 x 192, and while that might be sufficient for 3.25-inches, blown up to 4.2-inches and you start to notice blockiness. We’re guessing this is to maintain compatibility, but we’d have loved to have seen higher resolution screens for DSi XL specific titles. 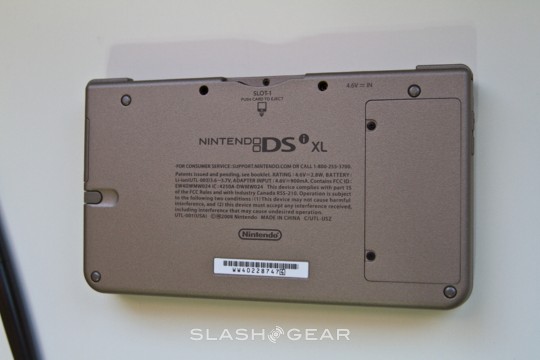 In comparison to the bigger chassis and the bigger displays, the DSi XL’s controls are pretty much unchanged from the DSi. That includes the D-pad and buttons, together with the shoulder triggers, and even the slot-in stylus is the same as on the smaller handheld. As before, the controls are highly clicky, but we found that after some heavy duty play they started to loosen up a little. Nintendo also throw a second stylus into the box, this one looking more like a regular pen than the narrow stick that actually stows into the handheld. There’s a lanyard loop at the end, but what looks like a pocket-clip is, bizarrely, simply a ridge of plastic.

The final significant change is the DSi XL’s speaker system. It’s certainly louder than the DSi, and you can crank music up higher than before without introducing as much distortion. However the software responsible for media playback is just as frustrating as before, with the biggest annoyance being Nintendo’s continued insistence that all music should be in AAC rather than MP3 format. Meanwhile it’s still impossible to browse the internet over the DSi XL’s WiFi connection while simultaneously listening to the media player. 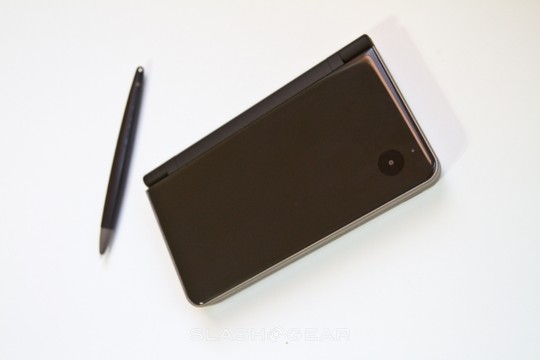 The dual 0.3-megapixel cameras still take the basic photos that won’t do anything to threaten your cellphone, never mind a dedicated point-and-shoot camera, and general speed is unchanged. In comparison to the DSi, the top half of the DSi XL is a glossy fingerprint magnet; happily Nintendo have prioritised functionality over style for the rest of the casing, using easily-held matte plastics. Build quality in general is high, and there’s little flex or creak even after a few journeys dropped into a rucksack. Nintendo reckon you’ll see 5 hours of runtime with the DSi XL brightness on high, and that’s eminently achievable. Of course, you can prolong gaming by notching down the brightness.

Unless you’re having significant issues seeing the displays on your DSi, or demand better audio quality, it’s hard to suggest existing owners upgrade to the DSi XL. Of course, with Nintendo taking the lead in promoting casual or “educational” gaming to those outside of the typical demographic, there could actually be a reasonable portion of gamers struggling. Without higher resolution panels – or the glasses-free 3D technology tipped for the next generation – the DSi XL doesn’t make a must-have case for itself. The fact that it goes on sale alongside, rather than replacing, the DSi is telling. This new model bridges the gap between now and the true next-gen Nintendo handheld, filling a niche certainly but leaving us still more excited about what’s to come.