Nintendo charging $0.50 for minors to register on Wii U Nintendo Network

It looks like Nintendo is making some sort of effort to keep its online community safe and more civilized on the Wii U, by requiring gamers under 18 to get a parent to assist in registering for an account on Nintendo Network. Minors must pay a one-time $0.50 fee payable with a credit card before they can start using the service.

When you register for an account, Nintendo will ask you if you’re over 18. If not, they tell you to go get a parent or guardian to finish the sign-up process. However, simply clicking “Yes” will take you to the next step of signing up. At this point, it will then ask you for your birthday — a move that will require minors to lie twice if they choose to not get a parent involved. 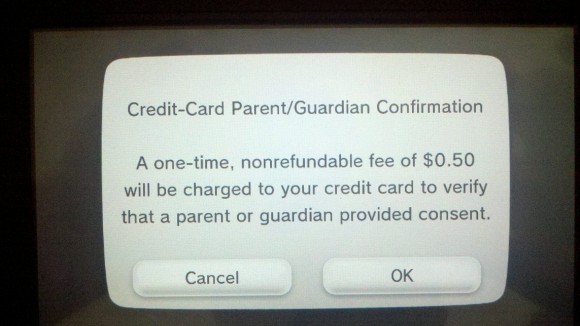 However, if a minor ends up telling the truth, but chooses not go get a parent or guardian, they’ll have to follow up with the $0.50 credit card payment to create their profile on Nintendo Network. Obviously, people under 18 don’t have credit cards, so Nintendo felt that this was merely a step that would stop liars in their tracks, since they would be forced to fetch a parent in order to pay the fee with a credit card.

However, the system isn’t completely foolproof. Anyone could just answer “Yes” to the 18 or older question, and then simply put in a bogus birthday, but I think Nintendo knows that they can’t completely stop minors from signing up without a parent’s consent. It seems that Nintendo is just adding a small barrier in front of minors, and whether or not younger gamers want to jump over it without stopping is based on how comfortable they are with lying.