NIF’s nuclear fusion with a laser: 1% of the way to Green Energy

You’ll be seeing several articles this week about how scientists have suddenly attained nuclear fusion this week for the first time – right here we’re going to brief you on how that’s not true. Not entirely true, anyway. With some close-up looks at the actual event and reporting – and some rather helpful simplification from Reddit user Restricteddata, we’re going to break down this scientific breakthrough.

There’s a sort of nuclear reaction that happens when a high-speed collision occurs between two or more atomic nuclei. This nuclear reaction is called nuclear fusion. It was first accomplished in a lab with hydrogen isotopes in 1932 by Mark Oliphant, and was made a reality again in the 1970s with lasers more than once. 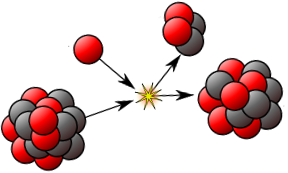 When this process occurs, not all mass is retained. It’s not like connecting a couple of LEGO blocks. Instead it’s more like smashing a couple of peeled oranges together – you’re going to get some juice. The bit that is retained we’ll call the pellet, while what’s not conserved is converted to photons – and that means energy.

The point at which we’ll be really excited is when the energy we need to put into this process is equal (or lesser than) the amount we’re able to get out. The process being shown in the release referred to here (and since last October, 2013*) has a lot more energy being used to attain nuclear fusion than is given off by the resulting pellet. Around 1% of the energy put into the laser, as RestrictedData and NPR suggests, is actually reaching the pellet.

*Back in October the folks at NIF had a Press Release sent out – this week they’ve released their actual test results.

“They didn’t get more fusion power out than they put in with the laser.” – Steve Cowley, head of Joint European Torus (JET)

The great thing that’s happened here with the NIF – the group that’s accomplished this scientific feat – is that the amount of laser “fuel” that actually did reach the pellet successfully was less than the energy was given off. It’s now a matter of being able to aim the entirety of the laser array successfully, hitting in at 100% so all fuel is able to be used for nuclear fusion.

So we’re not really all that close to nuclear fusion that’ll allow us to live forever on clean green energy. But we have made it another step closer to that goal.