The Nintendo Switch may be enjoying some early success, but a new study from Nielsen shows that Nintendo may have some work ahead of it if it wants the Switch to be the second coming of the Wii. According to Neilsen’s Games 360 report for 2017, Switch awareness among people who identify among non-gamers is still pretty low.

How low is it? The report says that just 7% of non-gamers say they’ve heard of the Switch. That means there’s plenty of room for improvement for Nintendo, which has suffered from something of a marketing problem in recent years. The Wii U – as many of you will remember – was confusing to many mainstream consumers, with most of the blame for that falling to Nintendo’s marketing efforts. 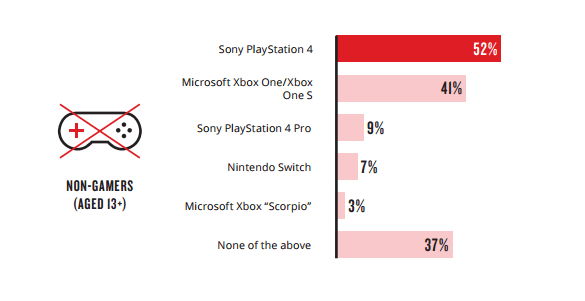 One console does rank lower than Nintendo’s newest, however: Microsoft’s Project Scorpio, which sits at a pretty dismal 3%. The difference, of course, is that the Switch has a dedicated marketing campaign behind it, while Project Scorpio doesn’t even a retail name yet. Scorpio also isn’t due out until we’re further into the year, so its low ranking isn’t much of a surprise.

When we look at awareness among the general population and gamers, the Switch fares quite a bit better. 22% of the general population aged 13 and older say they’ve heard of the Switch, while that number climbs to 29% when we look specifically at gamers. In both cases, that’s enough to beat out awareness for both Scorpio and Sony’s PlayStation 4 Pro. 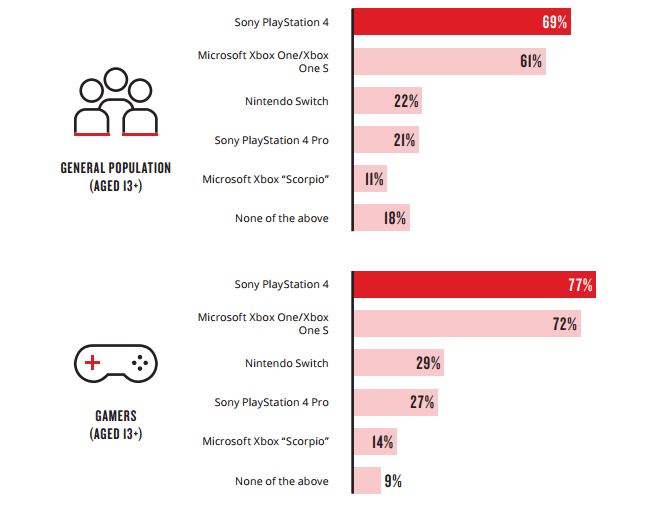 There could be one saving grace for Nintendo in regards to these numbers. Neilsen’s study covers only the first quarter of the year, which ended on March 31. That means the Switch had been out for less than a month by the time Neilsen stopped collecting data. Nintendo’s marketing efforts didn’t enter full swing until early January, so now that the Switch has enjoyed some time on shelves, awareness among everyone – gamers and non-gamers alike – could be significantly higher.

Still, this could mean that most of Nintendo’s launch audience is comprised of people who identify as gamers. If Nintendo wants the Switch to be the next Wii, it has to pull in people who don’t traditionally buy consoles. That’s a pretty monumental task, but Nintendo may be able to pull it off if the buzz surrounding big releases like Breath of the Wild, Splatoon 2, and Super Mario Odyssey keeps up.

To read Nielsen’s full report, hit up the source link below. Be sure to stop by the comments section to let us know what you think of this – is this just a case poor timing, or does Nintendo need to do more to pull in non-gamers?