The National Football League and Major League Baseball have filed a petition with the US Supreme Court arguing that antenna-streaming service Aereo violates copyright law and should be stopped by legal injunction. The petition is an amicus (“friend-of-the-court”) brief in support of the four major TV broadcasters, whose most recent of many failures to stop Aereo occurred in a New Court Court of Appeals suit. The Supreme Court is expected to hear the case sometime in 2014.

The petition argues that Aereo’s ability to stream football and baseball games from broadcast TV through the Internet–complete with commercials exactly as they appear on TV–on an à la carte basis “unravels the foundation of [our] business model by giving broadcast retransmission rights to unlicensed commercial strangers,” Gigaom points out. This is in reference to the fact that for $8 a month, Aereo customers can stream broadcast TV programming without having to buy bundles of channels they don’t want in order to watch the programs they do want. An excerpt from the table of contents of the petition is as follows (with “The Decision Below” referring to the New York appeals court decision not to stop Aereo):

II. This Case Raises An Issue Of Recurring And Exceptional Importance
A. The Decision Below Will Limit The Availability Of Valuable Programming On Broadcast Television
B. The Decision Below Places The United States In Violation Of Its International Obligations

In other words, the NFL and MLB are being hurt financially by Aereo. How exactly Aereo is “limiting the availability of valuable programming on broadcast television”? What the petition is referring to here is the sports leagues’ implication that if the court doesn’t comply with their request to stop Aereo, they will remove their programming from broadcast and switch entirely to cable, where customers will have no choice but to buy bundles just to watch sports. Currently the NFL shows about 90% of its games on broadcast TV, and MLB broadcasts about 400 games each year. 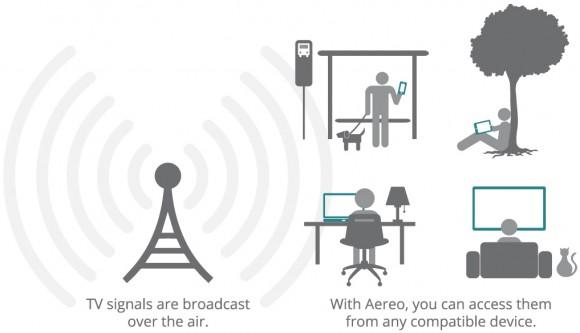 The latest city to receive legal clearance for Aereo service is Boston. At the time of this posting, the service is available in New York, Detroit, Boston, Atlanta, Houston, Miami, Dallas, Denver and Salt Lake City, with 18 more cities listed as “coming soon” on Aereo’s coverage map. As long as the Supreme Court upholds the New York appeals court’s decision, Aereo should be free to play ball for at least a couple more years.