The team-up that many have been waiting for is happening at long last. The NFL and Google have signed up a deal that will bring the upcoming SuperBowl XLIX front and center in Google’s world. But don’t get the wrong idea. The deal in place only covers search results, clips, and, of course, ads, with revenue being shared by the two. Official NFL content must still be consumed from NFL’s own source or partners, with Google providing only a teaser and a gateway to the Super Bowl world.

The agreement will deliver NFL highlight clips in YouTube and put NFL-related results at the top of Google’s search queries. The latter will feature prominently in Google cards that you get when searching items, like weather or biographical information. So instead of simply being shown links to pages or sites, Google will present instant information like schedules and points, a feature that will even be more useful on mobile devices. 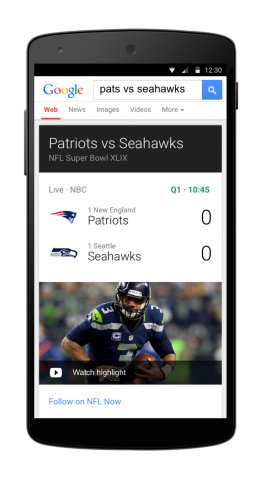 How about watching the Super Bowl on YouTube? Not a chance! At least not yet. Though a long awaited partnership, this deal hasn’t yet resulted in games being broadcasted live on YouTube. Maybe sometime in the future, but that future is not yet here.

Instead, NFL wants fans and viewers to patronize TV partners, which, of course, have paid a lot to show these games, and to go to its own website for official coverage. The NFL will, however, provide official highlight clips on YouTube, featured also in Google Search results, to entice viewers to dig in deeper inside NFL.com.