Although Google treats its Nexus devices with very special treatment when it comes to updates, it was never meant to last forever. Although disappointing, it is reasonable that Google impose a cut off in order to best manage its developer resources. Almost like a carrier or OEM, Google promises up to two years of major version updates for its Nexus smartphones and tablets. And just to make sure everyone’s on the same page, Google has now put up a table detailing exactly until when a Nexus device will get a new Android version.

This, in essence, is drawing the line for promised continued support for Nexus devices. That is, it is to help owners set their expectation and, indirectly, prevent them from getting disappointed about not getting the latest and greatest Android version for their beloved device. For example, despite a favorite among developers and hackers, the Nexus 5‘s “Android version” support ended back in October 2015. That means it is no longer entitled to officially receive Android N or later versions. 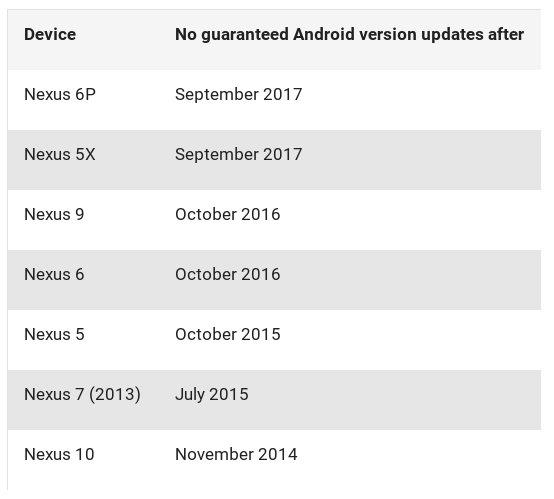 Google is naturally more forgiving over security patches, as those are often critical in maintaining the working condition of an otherwise completely usable device. Google promises 3 years from availability of the device or 18 months after when Google removed it from the Google Store. Sadly, Google doesn’t provide hard dates for these, which would help dispel some ambiguity.

It should be noted that dates are only for the end of official support from Google. The nice thing about Android is that it is open enough to allow for others to jump in to fill in the shoes. Android ROMs that carry devices well beyond their expiration dates are not that uncommon. Of course, the quality of the experience might not be similar. It could be worse or even better. But at least you will have the choice.