The new Nexus 7 appeared earlier this week in press photos, and today we’re getting another look at the device, this time in a couple of shots that include its packaging. The leak comes from a Reddit user who claimed to have just received the device, promising more images to follow shortly, though none have been provided yet.

The images were posted by Reddit user xQckx, along with a timestamp in the images. One show the box the Nexus 7 2 came in, and the second shows the tablet resting on the opened packaging, with Google’s logo visible in the bottom and some plastic scattered about. Unfortunately, there’s not much to tell about the device from the leak.

The user hasn’t yet responded to any questions about where he or she got the device, and has deleted at least one of his responses in the comment thread, so don’t get your hopes too high about more images. The tablet in the image does match the leaks we’ve seen in recent times, however, including the press shots that surfaced yesterday. 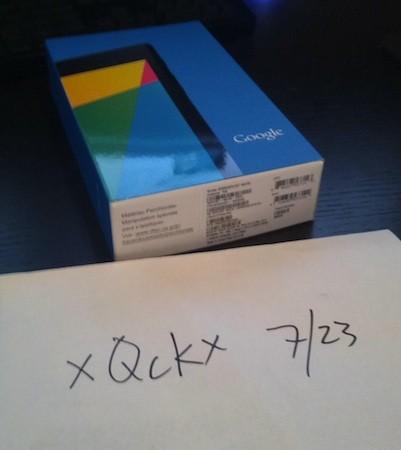 The 7-inch slate is said to have a 1920 x 1200 resolution, with large bezels on the top and bottom and slightly smaller ones on the sides. The rear camera is said to be a 5-megapixel offering, with the front-facing camera being 1.2-megapixels. Under the hood, there’s said to be a quad-core processor, and per the images, it looks like a pair of speakers on the back.

The first round of the device is said to be a 16GB offering, while a 32GB and possibly 64GB variety being available later on. It looks like there will be a microSD card for expansion, but that is yet to be seen. The 16GB version is expected to be priced at $229, with different prices coming in depending on various factors.