The Nexus 9 is gone. Google I/O is happening next month. Android N will be released next quarter. You know what that means, right? Yep, it’s time for a new Nexus device and, since Google hasn’t changed its pattern here, we’re looking at another Nexus smartphone. Of course, there’s the eternal guessing game of who gets to make it this year. But, it seems there’s another angle to be looked at. An entry at the Geekbench site reveals a “google Nexus 6P” (with that exact capitalization) that bears a Snapdragon 820 and 4 GB of RAM.

Of course, there’s already a Nexus 6P, one that was made, for the first time, by Huawei. That one, however, sported a Snapdragon 810 (yes, the controversial one) and 3 GB of RAM. This newer one brings the Nexus 6P to early 2016 flagship standards, at least as far as processor and RAM goes. Considering the rest of the Nexus 6P specs are already high end standards anyway, that’s a pretty sweat deal. 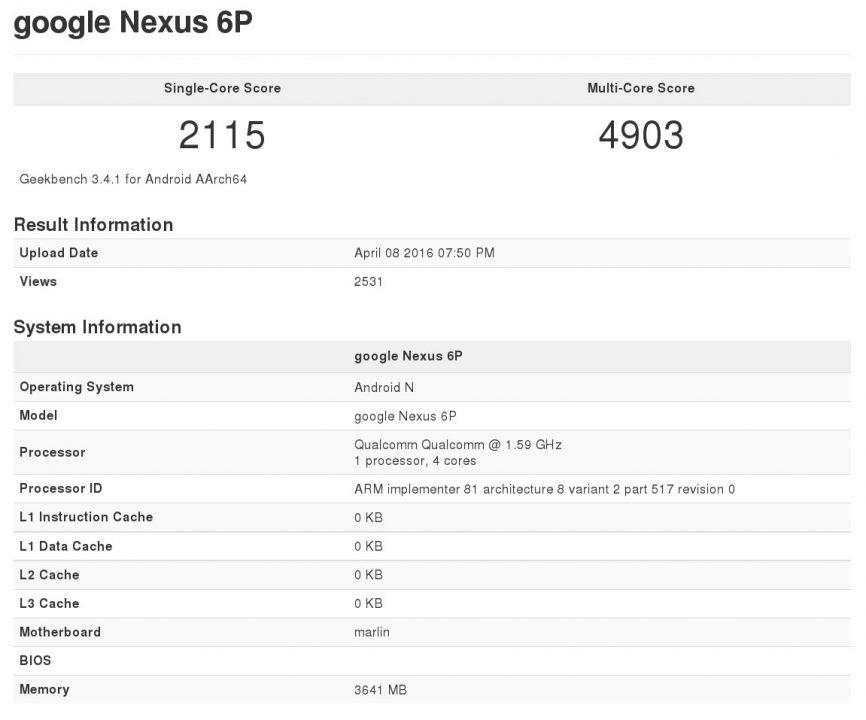 There is one interesting detail in this sighting, however. The motherboard, not usually cited in benchmarks, is named as “marlin”. That has long been held as one of the codenames for a Nexus device, as Google names its Nexus after fish. There is one rumor, however, that claims that this marlin will be made by HTC. The “6P” used here, however, would suggest otherwise, as it is already a name used by Huawei. It is hardly imaginable, though not impossible, that Huawei would so easily surrender its new found prestige to rival HTC. We’ll just have to wait and see which speculation hits the mark.