Flagship smartphones seem to be stuck at 4 GB of RAM, save for a few exceptions, but not all smartphones, even Google’s once prized Nexus line, can boast of that much. Specifically, the Nexus 5X seemed stuck at a time when nobody needed more than 2 GB of RAM. Apparently, the device’s hardware could have actually gone with more, like 2 GB more. And someone actually did, with a little help from a rather helpful Chinese repair shop.

When you think about it, the Nexus 5X is a bit of an oddball. The Nexus line was supposed to be the epitome of what it is to be an Android phone or tablet, but the Nexus 5X was mid-range at best when it launched. It was like a slightly upgraded version of the Nexus 5, made by the same company even. Thing is, when the Nexus 5 launch, it was, in fact, top of the line.

And it wasn’t like the Nexus 5X was not capable of supporting more than 2 GB of RAM. As XDA member Cathair2906 discovered, it could handle even 4 GB. That “discovery” was at the behest of a repair service in China who suggested upgrading the RAM while fixin the CPU. And it miraculously worked without a hitch.

Cathair2906 sent his Nexus 5X in for repairs because of the dreaded bootloop issue that now plagues many LG devices. One of the theorized causes of the problem is a poorly attached processor, so having it repaired involved removing the System-on-Chip first, which includes the processor as well as the RAM, which sits on top of the processor. If you were going to do that anyway, might as well replace the RAM with something higher. 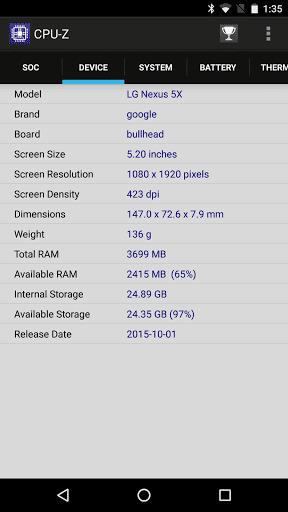 Fortunately for Cathair2906, it worked in his favor and he now enjoys a one-of-a-kind Nexus 5X, the only one with 4 GB of RAM. That said, this is probably going to be a rare occurrence unless you happen to be living in China or Hong Kong, where Cathair2906 is located, where there are dozens of such shops will to do such an operation.