All around the world, people live in harsh arid climates or areas where there is very little clean and available drinking water. Researchers at ETH Zürich developed a condenser to be used in countries where water is in short supply. It’s the first zero-energy solution that harvests water directly from the atmosphere throughout the entire 24-hour daily cycle.

The device utilizes a self-cooling surface and a special radiation shield. Systems for harvesting water from the atmosphere typically require high energy input or rely on passive technologies that exploit the temperature change between day and night. Other available technology includes dew-collecting foils that can only extract water at night because the sun has to heat the foil during the day making condensation possible. ETH Zürich’s new technology features a specially coated glass pane that reflects solar radiation and radiates away its heat through the atmosphere.

On the underside of that glass pane, water vapor from the air condenses into water. Researchers say the process used by their technology is the same process that happens on poorly insulated windows in the winter. Scientists coat the glass with a special polymer and silver layers. The special coating causes the pane to emit infrared radiation at a specific wavelength window to outer space without absorption by the atmosphere or reflection back into the pane.

Another key element in the system’s design is a cone-shaped radiation shield that deflects heat radiation from the atmosphere to shield the pane of glass from solar radiation. The shield does allow the device to radiate heat outward to self-cool in a completely passive manner. Researchers found the new technology can produce at least twice as much water per day per area as the best current passive technologies that use foils. 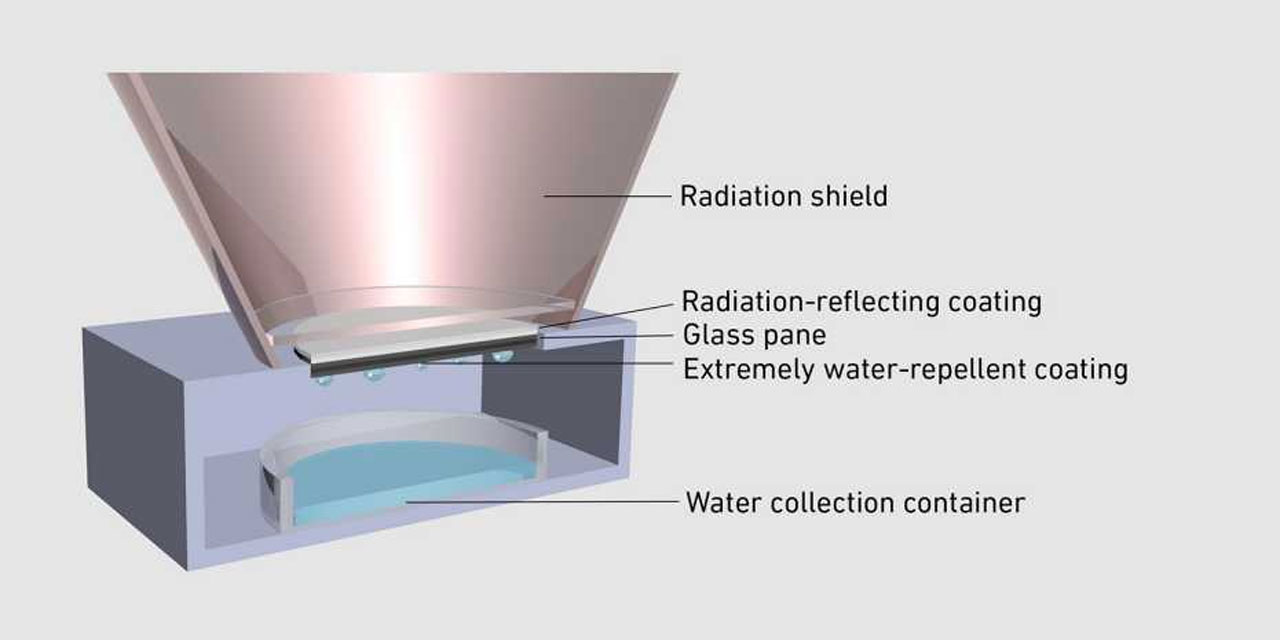 Researchers created a small pilot system with a pane diameter of 10 centimeters and found it delivered 4.6 milliliters of water per day under real-world conditions. A larger the device with larger panes would produce more water. Under ideal conditions, the device could harvest up to 0.53 deciliters of water per square meter of pane surface per hour. The theoretical maximum value for harvesting is 0.6 deciliters per hour, which it is physically impossible to exceed. Scientists on the project note that multiple systems can be placed together to harvest more water.