You probably already know this by now, but there are a lot of people using Twitter. A new study conducted by Beevolve gives us an insane amount of statistics on these users, gauging everything from how many followers the average user has to which background color is used the most by females and males. The study – which surveyed a total of 36 million Twitter profiles – may confirm a lot of the stuff you already assumed about Twitter, but there are some surprises to be found in the results. 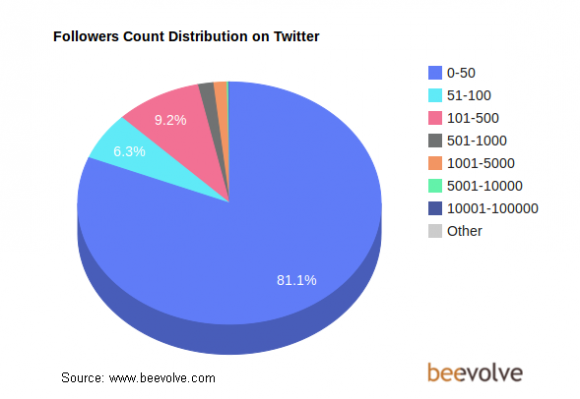 How about this one: when it comes to background color preference, which color to do you think females prefer most? If you said pink, you’re wrong, and shame on you for falling back on gender stereotypes. It’s actually purple (Eminence if we’re being specific), while males prefer darker tones, with steel grey taking the lead by a pretty large margin. Beevolve found that the majority of Twitter users have less than 50 followers, just as the majority are following less than 50 people.

Females seem to be a bit more active on Twitter than males are, with the study claiming that males have tweeted an average of 567 times, while females have tweeted an average of 610 times. “Love” is the most popular word used in Twitter bios, and Family is easily the most popular subject for users aged 15 to 65. There’s a lot more to Beevolve’s survey than what we’ve talked about here, so be sure to check the full survey out for even more ridiculous statistics. Just be careful – when it calls this an “expansive” study, it isn’t kidding, and you may just get lost in the absurd amount of information the survey provides.