New tattoo ink is a mood ring for health problems

Humans have been getting tattoos since ancient days, but modern science is giving them a new purpose: health condition monitoring. Researchers have detailed a new type of permanent tattoo that changes color when certain health biomarkers in the body change, offering visual indicators that something is wrong and the patient needs to visit their doctor.

The new diagnostic tool was developed by researchers in Germany and recently published as a study in the journal Angewandte Chemie. Though both appear similar when injected into the skin as a tattoo, the newly detailed health tattoo features a colorimetric analytic formulation instead of typical tattoo ink. 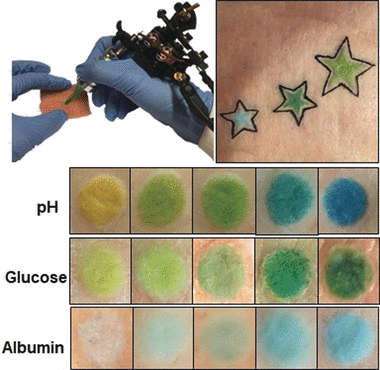 Permanent tattoos featuring these sensors were applied to pig skin, which then had glucose, albumin, and pH levels adjusted to monitor the color changes. The tattoos did indeed change colors based on concentrations as shown above, hinting at a potential future way for patients to keep an eye on their existing and potential health issues.

The scientists behind the project indicate that other sensor formulations could be developed to monitor for everything from dehydration to concentrations of specific pathogens. Someone who has diabetes, for example, may one day get a small tattoo that is able to shift colors like a mood ring to indicate when their glucose levels are too low or too high.